Home
Islam
"when we die as martyrs, we will go to heaven."

That which a culture does not denounce, a culture promotes.

Two items on the table tonight that need to get some wider play and some accompanying denunciation.

First up, from Haaretz:

An Arabic children’s choir has been racking up views all over the world with the new YouTube hit “when we die as martyrs, we will go to heaven.”

The song was apparently recorded by the Jordanian-owned production company and television channel “birds of Paradise.”

According to The Investigative Project on Terrorism (IPT), one of the world’s most comprehensive data centers on radical Islamic terrorist groups, the song is a hit on Arabic and worldwide websites and the children’s choir performing it fast is becoming one of the most popular children’s groups in the Arab world.

Journalist Fawzia Nasir al-Naeem wrote in the Saudi Arabian newspaper Al-Jazirah that “[Birds of Paradise] is one of the most widely distributed children’s song groups in the Arab world, and it seems to have crossed the ocean to Canada and Britain.”

She added that the group represents a new wave in Jihadist youth indoctrination, as it is child-friendly, as opposed to previous Jihadist programs.

A culture that uses innocents to promote martydom is a culture that’s sick.  Beyond sick.  It’s evil.  And there’s nothing anyone can say that would convince me to see it differently.

Exactly three years ago, on May 22, 2007, an Egyptian scholar was disciplined by Al Azhar University, one of Islam’s most prestigious institutions, after he issued a fatwa calling upon women to breastfeed their male colleagues. Dr. Izzat Attiyah said that his fatwa offered a way around mixing of the sexes in the work place since breast-feeding established a maternal relation even if the beneficiary was not the woman’s biological son or daughter.

women could give their milk to men to establish a degree of maternal relations and get around a strict religious ban on mixing between unrelated men and women. [Because] a man who often entered a house and came in contact with the womenfolk there should be made symbolically related to the women by drinking milk from one of the women. Under the fatwa, the act would preclude any sexual relations between the man and the donor woman and her relatives.

Sheikh al-Abaican thus “modernizes” Dr. Izzat’s position — that the man must breastfeed directly from the teat — by suggesting that “the man should take the milk, but not directly from the breast of the woman. He should drink it and then becomes a relative of the family, a fact that allows him to come in contact with the women without breaking Islam’s rules about mixing.

At any rate, where do all these “adult breastfeeding” ideas originate? As usual: Muhammad. A canonical hadith tells of a woman who once asked Muhammad what to do about the fact that a young boy who had been living with her and her husband had grown into manhood: that a non-relative adult male was freely residing with them, seeing his wife without her veils, was upsetting to the husband. So the prophet told her to “breastfeed” the man. Shocked, she responded saying that he was a grown man; Muhammad said — according to some traditions, while laughing — “I know.” The woman breastfed the man, and reportedly her husband was no longer upset, as the act of breastfeeding turned him into a kinsman. Muhammad’s favorite wife, Aisha — the “mother of the believers” — frequently relied on this practice to meet with non-related males (one of the greatest debates of her time revolved around how many “breastfeeds” were enough –one, five, or ten — to make a man a “family-member.” See here for more hadiths).

The importance of this breastfeeding business has less to do with its sensationalist quality and more to do with what it says about the overbearing and intrusive nature of Sharia law in Muslim life. Muslims cannot escape adult breastfeeding simply because it is contained in Islam’s most canonical hadiths (including Sahih Muslim and the Sunan of Abu Dawud and Ibn Maja). Moreover, it has been addressed — and endorsed — by such Islamic authorities as Ibn Taymiyya and Ibn Hazm. To reject this hadith is to reject the sources and methodology of usul al-fiqh — in short, to reject Sharia law.

Imagine for a moment with me… imagine that what you’ve just seen, heard and read, imagine if these things were practiced by a Christian sect… imagine if it were to become popular amongst many Christians… imagine the denunciations, how negative the press would be, how these items would be played over and over again on MSM outlets, how they’d be played again each year during Christmas and Easter… can you imagine the reaction?

But because these are Muslims, you’ll only see this sort of thing if you go hunting for it… you know it’s true.

That which a culture does not denounce, a culture promotes.

Dem Congressman Insists Financial Reform Bill Will Help "Good American People, Not Minorities Or Defectives"
"Fidelity Is Only For Your Mate!" 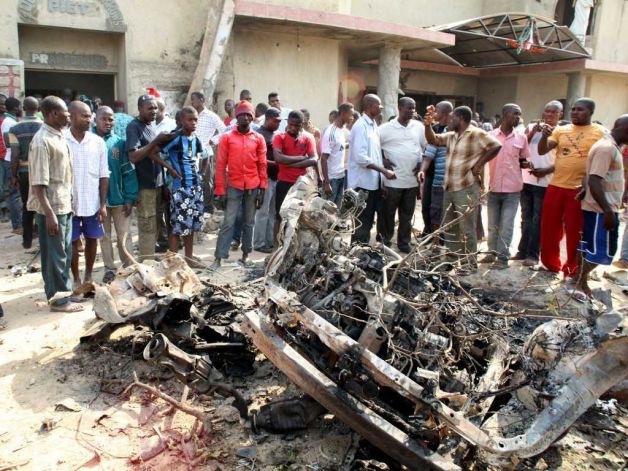