I’m just here to pick up an iPad.”

4) (JP) – “Now listen, Nick buddy… this whole banning the burqa thing… I’m not trying to tell you what to do, but I wouldn’t bank on Israel being around much longer. I’m not saying, I’m just saying, you know….“

5) (Stephen Macklin) – “Wait you’re not that with that Israeli guy are you? O.K take the picture.“

The Readers Choice Award this week went to Rodney Dill’s winning entry. In its place I offer one more winner:

(Maggie Mama) – Obama: “But I’ve been doing all the talking. Now I’m eager to hear what you think about me.”

Joules From Heaven
Democrats Get Roasted At Home For ObamaCare Vote: A Preview Of The Banquet Of Consequences 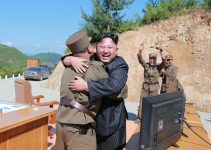