Home
Health Care
The path to single payer
“Oh what a tangled web we weave, when first we practice to deceive.”
Sir Walter Scott, Marmion, Canto 6

From the very beginning, we’ve known that ObamaCare has been about one thing: implementing in the US a single payer health care system like those in Canada and the UK. The Democrats have denied it for some time. President Obama has said in the past and he’s saying it again now that if you like your insurance plan you can keep it. This is not true.

Some of the most ardent critics of the bills in the House and Senate didn’t like them because as far as they were concerned they didn’t alter our current system radically enough. Members like Dennis Kucinich and Jan Shakowski have been up front about getting rid of our private health care system, the best in the world, and imposing a socialized, government run, single payer health care system.

ObamaCare is the path to that single payer system and it’s a pretty short walk, quite honestly. This is one way it might happen.

The bill the House that is supposed to come up for a vote this weekend will impose regulations on all health insurance companies that will make it impossible for them to stay in business. They will be required to provide insurance to people with preexisting conditions. The only way any insurance company can stay afloat when it is required to accept the sickest people is if everyone, the young and healthy specifically, buy insurance as well. Healthier people don’t require as much health care, so their premiums will go to pay the claims for sicker people.

But here’s the problem. The fine for not buying health insurance is less than the cost of insurance itself. Since there’s no incentive for the healthiest among us to buy insurance since they will have to be accepted when they do get they get sick, many people will choose to pay the fine, which will go to the government and not the insurance companies.

Facing the collapse of the private insurance industry, the government will step in and proclaim the industry too big to fail and take them over a la GM and Chrysler. Then viola, you’ve got your government run, single payer health care system.

If this happens, it won’t be accidental. ObamaCare is setting up the insurance companies to fail even though the president is still telling people they can keep their plans if they like them. It will put so many regulations and limitations that these companies simply won’t be able function.

My theory is not that far fetched. In an interview Joe Biden told Jake Tapper, “you know we’re going to control the insurance companies.”

It’s become pretty clear that they are. And we will all be the worse for it. 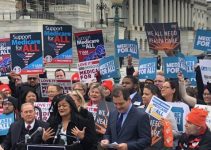