Last Wednesday night, a strange, beautiful spiraling light appeared in the sky over Norway. Astronomers quickly denied any connection between the spiral and the Aurora Borealis, leaving UFO geeks and other sorts to speculate about what caused the haunting image in the Scandinavian sky. Sadly, we will have to keep waiting for that elusive “first contact.” The Russian defense ministry announced that the light show was the result of a failed missile test. A Bulava ICBM was launched from a submarine submerged in the White Sea. The third stage of the missile failed, presumably at high altitude.

An explanation of what happened is simple enough — observers were watching the rocket down its axis of trajectory, rather than perpendicular to that axis (which is how we view a Space Shuttle launch, for example). If the guidance system or one or more of the rocket motors malfunctioned, the rocket would probably begin to spiral. Viewed from a perpendicular axis, the rocket would appear to wobble, but viewed on-axis you would see a slowly-expanding spiral pattern. At very high altitudes, where the atmosphere is thin, the material ejected from the rocket (smoke, fuel, debris, or whatever) would obey Newton’s third law in a more pronounced fashion, and continue on its spiral trajectory even after the rocket had broken apart. The combination of moonlight and smoke (microscopic particles are very good light diffusers) could certainly provide enough illumination to make the event visible for some time.

YouTube user “unmannedspaceflight” put together a nice computer simulation of what this would look like, based on a rocket ejecting debris both behind and out the side (which could very well happen with a major system malfunction). Here is what he came up with:

Fortunately this was not the prelude to an alien invasion, or a mini black hole caused by the Large Hadron Collider. It was simply an event that obeyed ordinary physics laws, viewed under somewhat unusual circumstances. 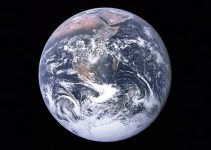