Home
Islam
The Balance Between Judgment and Hysteria

Thursday’s shootings at Fort Hood have naturally evoked strong emotions. And the media and some prominent political leaders have taken all-too-predictable postures, two of which I feel compelled to address. The falsehood that Islam is aligned with terrorism and malice, and the falsehood that Islam is a victim in such situations as this, with innocents who worry about an unreasonable backlash. Both contentions are wrong.

First, about Islam. There are over 1.5 billion practicing Muslims in the world. So far, there have been 221 terrorist incidents in 2009 through November 2, so even if we say that every single one of those were committed by a Muslim (including attacks in Greece, Ireland, South Africa, and the Starbucks bomb in New York) and that two dozen Muslims were involved on average in each incident, that only implicates 5,304 Muslims and means that over 99.999% of Muslims worldwide had nothing to do with terrorism so far this year. Frankly, if even one percent of Muslims worldwide had it in for America, or even against Israel, we’d see an unprecedented level of violence and murders, because even one percent of Islam would be a force of 15 million terrorists, and no realistic estimate of terrorist activity has ever come close to a million total, much less 15 million. Between Iraq and Afghanistan, over 50 million Muslims have come into close and regular contact with U.S. troops. While there are places of hostility against the West and the U.S. in particular, and some spots rank with pure evil and hatred, the soldiers who have been there will tell you that it has much more to do with culture and politics than religion. For most Muslims, their faith is a private matter between them and God, a question of living honestly and by their best ideals, and hatred towards another human is a sin to be avoided. Most Muslims love their families and their nation, and have a generally tolerant outlook towards everyone else.

So what happens when someone like Nidal Hasan (allegedly) decides to kill innocents while screaming the name of his god? To me, once you get past the emotion and look at the facts, pretty much the same thing as any fanatic who goes psychotic. Hasan had no wife or girlfriend, he had no close friends, even his family and those at Fort Hood who had the most contact with him note that he was distant and aloof. While Hasan complained to some family that he was being mocked for his Muslim beliefs, other Muslims at Fort Hood emphasized that the military accommodated them at all times and they felt proud to serve with the men and women in the U.S. Military. When you dig down to the bottom of it, Hasan was a lot like another Islamist Loser: Khalid Sheikh Muhammad. Does this look like a chick magnet? A guy who wants to raise a family and be a good husband and father, someone who thinks first about his moral duties and personal integrity?

No. In any culture, this guy is a loser, albeit a clever and dangerous psychopathic loser. He and the real world were quits, so he joined up with a group of other losers who tried to compensate for their personal failures by blaming everyone else. And that is what hapened with Major Hasan. He became bitter about his place in the world, and decided to punish everyone else. That’s really the only way to explain how someone could decide to kill a roomful of innocent people, most of whom he had no grievance whatsoever, including a 21-year-old pregnant soldier, a band member, two soldiers who had just returned from Iraq, and two others who were being deployed to Afghanistan just as Major Hasan was scheduled to go, among others. This was not a blow against some imperial power, it was the impotent scream of a coward.

Islam has its share of such cowards, to be sure, but so has Christianity and other religions. Remember the cowards who bombed abortion clinics in the name of Christ? Anti-war protesters who think nothing of attacking soldiers in the name of peace? Look at the troubles in Northern Ireland for nearly a century – there is nothing in either the Anglican or Roman Catholic dogmas to excuse the kidnappings, torture, bombings, and murders that happened there for so long. Consider the tribal conflicts in Rwana and Burundi not so long ago, or the cold-blooded extermination practices of Miloslavic and his Serbs. Even Buddhism, founded on clear commitment to reverance for life, has its share of extremists, including Triad groups who see no conflict in murdering people then going to temple to be ‘spiritually cleansed’, so they won’t feel bad about their crimes. My point is that some people will abuse the tenets of any religion.

So why do Muslims not march in outrage over the hijacking of their faith? For one thing, I don’t believe they feel they should have to state what they think is obvious. Even though most serial killers are white males, I have never felt it necessary to point out that most white males would never commit murder. Even though many crimes were committed in the name of Christ over the years, most notably during the various Inquisitions, even atheists and Muslims recognize that Christianity in its essence had nothing to do with the spirit of evil which tortured and killed in the name of the Prince of Peace.

It is true that certain teachings of Mohammed are troubling to non-Muslims, but let’s not forget that other beliefs have had similar problem areas. Most Mormons today live exemplary lives of charity, tolerance and humility, and so have very little in common with the racist, xenophobic Joseph Smith. Many Scientologists are open-minded and just want to live by their creed, and so have almost nothing in common with the arrogant and greedy L. Ron Hubbard. Come to that, I am a Southern Baptist but have little in common with most of the denomination’s leading ministers. I’m not saying they aren’t fine men and honest, but a man whose career focuses on only one creed and point of view has trouble seeing things the same way as a working man who sees real life from the perspectives of the street and the diversity of a truly global community.

Also, Islam is rooted in the culture of the Middle East. While American Muslims live in the modern world, their faith comes from a place where women and the young are expected to give way to the men and the elders, where criticism is uncommon because it so often leads to conflict and escalation, and where challenging those in authority is seen as rebellion rather than reasonable doubt and skepticism. Even the Roman Catholics have their Jesuits to challenge assumptions; Islam has not yet reached the point where theologians can help the faith become relevant to changing social and cultural conditions. Whatever he was, the prophet Mohammed did not prepare his people for a world of cultural diversity and demographic trend shifts.

That brings us to the second problem. Islam likes to play the victim card, even when a Muslim is the criminal. It is very difficult for a Mullah to explain why a man like Osama bin Laden, educated and from a good family, would countenance the murder of innocents on a Hitler-like scale. So they evade the question and try to leverage a sense of guilt from the victims, because the United States is a generous and open-minded country, one of very few willing to examine its own behavior in a critical way. No one in the Saudi royal family, for instance, has ever shown an interest in criticizing their own policies and behavior in the past, and the Palestinans are even worse. These guys have made the wrong choice in every major decision, since they chose to back the Nazis in World War 2. But rather than consider the foundation of so many bad choices, Palestinian leaders chose instead to insult and attack Isreal, precisely because Israel is careful of its behavior and considerate of the rights of Pelstinans in most cases.

In the Unted States, Islam has always shown that it sensed its place in America as a tolerated segment of the population, rather than a welcome member of the community. This comes to some degree from a certain discomfort with the way Muslims speak and act and dress, but it also comes from Muslims’ self-chosen segregation. Muslims do not eat the same foods as most Americans, do not attend the same entertainment and recreational events as most Americans, and do not treat Americans as close friends in most cases. Islam is not liberal in the traditional sense, many Muslims act as if Americans carry a kind of infection, and so it is difficult for a non-Muslim to be close friends with a believer. Even in the heart of America, Muslims often act is if they must live apart. This happens with other faiths, of course. Hasidic Jews, for example, also cordon themselves off from contact with Gentiles and they have strict dress and dietary codes which set them apart. Some fundamentalists also dress, eat, and behave in ways that seem strange to most Americans. But there are many more Muslims than Hasidic Jews or fundamentalist Christians, and so the segregated culture becomes more obvious.

The acts of a Hasan or other psychotic Muslims is an issue that has no easy answer, but it is important for non-Muslims to recognize that such behavior is anomolous to Islam, just as it is important for Islam as a whole to recognize that these extremists must be denounced in the interest of understanding what makes someone a Muslim, and what does not.

Hasan worshipped with 9-11 hijackers
"Am I killing, yes I am, I know that" 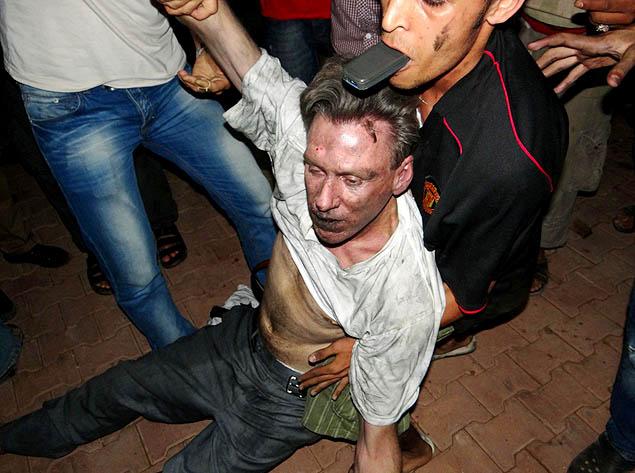