Michael Laprarie was on this first. See below.

Senate Majority Leader Harry Reid’s comments about American business during the health care debate could fill a thesaurus of inanity. Just last week, while the Majority Leader was appearing as a witness before the Senate Judiciary Committee, Reid told this whopper:

As for insurance companies, “There isn’t anything we could do to satisfy them in this health care bill. Nothing,” Reid said. “They are so anti-competitive. Why? Because they make more money than any other business in America today… What a sweet deal they have.”

It is uninformed, moronic demagoguery such as this that passes for debate in the world’s greatest deliberative body. The dumbing down of the healthcare polemic has had many low points (according to its proponents it is “defecit neutral”, it will lower business costs, and it will eliminate wasteful spending) that simply require the suspension of disbelief. In a refreshing moment of real fact checking, the AP’s Calvin Woodward” laid the wood to Reid’s brazen dishonesty about the profitability of U S healthcare insurers:

WASHINGTON (AP) — Quick quiz: What do these enterprises have in common? Farm and construction machinery, Tupperware, the railroads, Hershey sweets, Yum food brands and Yahoo? Answer: They’re all more profitable than the health insurance industry.

In the health care debate, Democrats and their allies have gone after insurance companies as rapacious profiteers making “immoral” and “obscene” returns while “the bodies pile up.”

Ledgers tell a different reality. Health insurance profit margins typically run about 6 percent, give or take a point or two. That’s anemic compared with other forms of insurance and a broad array of industries, even some beleaguered ones.

If the Senate leaders attempting to ram ObamaCare through the Congress are telling easily disproved lies such as this one must wonder about the real whoppers yet to be unearthed in the still unreleased released bill? 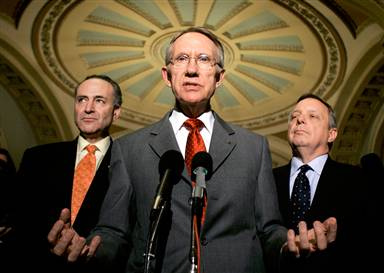