This week’s Weekend Caption Contest™ was another monster hit. The picture this week may have seemed harder to caption than some others, but we ended up with some outstanding captions. The assignment this week was to caption the following picture: 2) (dfbaskwill) – “It’s all ball bearings nowadays. That, or the Fetzer Valve.“

3) (BluesHarper) – “After closer inspection he determined it was a girl plane.“

6) (sarahconnor2) – “Welcome to Obama Airways. We are continuing our descent“

The Readers Choice Award this week went to John’s winning entry. In it’s place I offer this most tastelessly funny caption:

(Jeff) – “John F Kennedy, Jr. returns and drops in for his uncle’s funeral.”

The Liberal Lovefest For Castro Never Ends
The American Thinker: Obama as Leninoid 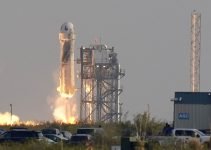