Home
Space
Forty Years Ago Today – The Flight Of Apollo 11

Forty years ago today, July 16, 1969, the most momentous space flight in the history of mankind rocketed skyward at 9:32 AM EDT. Apollo 11, the culmination of the United States space program that integrated the talents of over 300,000 scientists, engineers, skilled crafts workers, pilots, astronauts, and countless other professionals, was the mission that would finally achieve the goal set forth by President John F. Kennedy in 1962 — “landing a man on the moon, and returning him safely to the Earth.”

The timeline attached to President Kennedy’s proposal — the mission would have to be launched before the end of the 1960’s — was meant both as an inspiration for the US space program, and a challenge to the Soviet Union, which had beaten the US both in successfully launching a satellite into orbit (Sputnik, 1957) and in launching a manned space flight (Yuri Gagarin, 1961).

The Soviets accepted our challenge, but never could get the bugs worked out of their designs for a massive rocket capable of lifting a heavy payload and blasting free of the Earth’s gravity. Their gigantic N1 rocket was launched four times between 1969 and 1972. Each launch attempt proved to be a spectacular failure.

America’s equally gargantuan Saturn V rocket also had its share of problems, but ultimately its design proved enormously successful. Whereas the Soviet N1 utilized small 30 kerosene and liquid oxygen engines in its first stage, the first stage of the Saturn V utilized five enormous F-1 engines. Although the size of the F-1 engines gave engineers a number of challenging problems to solve, the Saturn V was never plagued by the sheer number of mechanical failures experienced by the Soviets, who had to synchronize 30 engines in order to produce a working rocket booster. And while all three stages of the Soviet N1 used kerosene and oxygen as fuel, the American Saturn V employed kerosene as a rocket fuel in only the first stage. The second and third stages of the Saturn V used J-2 rocket engines that burned liquid hydrogen and oxygen, a lighter and more powerful rocket fuel. Thus the more reliable Saturn V could lift a much heavier payload.

The Apollo program was grounded for nearly a year after the fire, while the command module underwent a through redesign. Apollo 4 (Nov. 1967) and Apollo 6 (April 1968) were unmanned test launches of the full Saturn V launch vehicle and command/service module configuration. Apollo 7 (October 1968) was the first manned Apollo flight. Apollo 8 (December 1968) was the first manned space flight to break earth orbit and orbit the moon. The reading of Genesis 1 by the Apollo 8 crew while circling the moon was an incredible event that spiritually united a world that had been torn apart by war and strife.

Apollo 9 (March 1969) was the first mission flown with the Lunar Module. The astronauts successfully extracted the LM from the third stage of the Saturn V, orbited the earth with the command/service module (CSM) and LM docked, separated the LM and tested its engines, and performed several space walks. Apollo 10 (May 1969) set the stage for the moon landing. The full spacecraft (CSM and LM) left earth orbit, orbited the moon, separated, and the LM crew descended to within 8.4 nautical miles of the lunar surface.

And in July 1969, the first mission to actually land a manned space craft on the moon was a “go.”

If you were one of the millions of viewers around the world who watched the launch of Apollo 11 forty years ago this morning, here is what you saw:

More to come on the historic flight of Apollo 11 during the next few days, including a celebration of Neil Armstrong’s epic “giant leap for mankind” on July 20th. 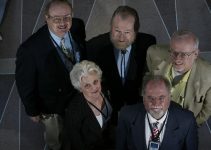