This week’s Weekend Caption Contest™ had a pretty good showing for a holiday weekend. The assignment this week was to caption the following picture: 5) (Porkopolis) – “After weeks of practice in front of a full-length mirror, Senate-elect Al Franken channels John Kerry and tries out his ‘Do You Know Who I Am’ pose on an unsuspecting constituent.“

6) (iwogisdead) – “Al Franken reacts to learning that he has to pay for his coffee in the Senate cafeteria.“

The Readers Choice Award this week went to griff’s winning entry. In its place I offer this editor’s choice caption:

(Rick13) – “You just watch Kevin! In five years I’ll prove how stupid the people of Minnesota really are, and I’ll be a U.S. Senator!”

Tea Party Weekend
And Now For Something Completely Familiar... 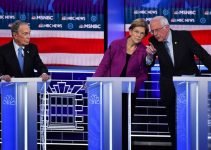