I suppose it’s my turn to write about the sudden resignation of Sarah Palin this past Friday. As I digested the news reports and commentary this weekend, one word kept popping into my mind: “outsider”.

In politics, there is something magical about being an outsider. Political consultants sell their candidates’ outsider status as a kind of synonym for purity. Outsiders are expected to work for the people, not for the system, because they have not been bought and paid for by special interests.

Barack Obama’s political strategists used his relatively short tenure in national politics in order to portray him as an outsider. Obama was young, smart, free from corruption, free from D. C. entanglements, not beholden to the Clinton political machine, not controlled by the DNC, etc. They directly contrasted this to the cold, calculating demeanor of Hillary Clinton, who was suddenly transformed from the idealistic, progressive sweetheart of the 1990’s into the epitome of the kind of iron-fisted Washington establishment figure that Obama’s “Hope And Change” was supposed to trump.

Then Sarah Palin showed up. And she really was an outsider, in every conceivable sense of the word.

We know that John McCain’s campaign staff harbored a lot of resentment toward Sarah Palin. Perhaps jealousy is a better word. Palin immediately eclipsed McCain on the campaign trail, simply by being herself. She rose to the top of the ticket without minute-by-minute briefings and instructions from McCain’s handlers. She planned her own schedule, she took her own phone calls, she chose her own outfits (until McCain’s staff forced her to wear outfits picked by a high-dollar Manhattan fashion consultant, a move which grossly backfired). She politely, but firmly, refused to be turned into a puppet by the McCain campaign staff. And that burned them up.

In spite of the wholesome nature ascribed to political outsiders, within the world of politics outsiders are thought of as foolish amateurs, and their ignorance of the system is considered to be a dangerous liability by political veterans. Sarah Palin’s natural popularity was something that seasoned political insiders within both the Democrat and Republican parties found difficult to understand. I think Palin was somewhat prepared for the attacks from Democrats (though no one could have predicted the viciousness with which liberals would personally attack her and her family, especially her son Trig who has Down syndrome). But I don’t believe that she was prepared to be handled in such a rough and patronizing manner by staffers from her own party.

I think Palin learned an important lesson from her vice presidential candidacy: the Washington, DC political establishment did not like her, and no one — not even the national Republican party — could be trusted to back her if she decided to pursue a Senate or Presidential candidacy.

I always believed that Sarah Palin entered politics to make a real difference. That’s why she got involved in her local school board, then ran for city council and mayor. When she was appointed Chairperson of the Alaska Oil and Gas Conservation Commission, she refused to go along with the “good old boy” system and eventually filed ethics complaints against Oil and Gas Conservation Commissioner Randy Ruedrich and former Alaskan Attorney General Gregg Renkes. Both of these men were Republicans, and Sarah’s commitment to ethics above party politics is a marvel that few political figures are capable of. (Honestly, can you imagine Barack Obama taking on the Chicago Democrat political machine in a similar fashion?) I think we can take Palin at her word when she says that being a lightning rod for the Republican party has severely crippled her effectiveness as an elected leader.

So what will Sarah Palin, a legitimate political outsider, do now that she is no longer an elected official?

I think Palin knows that she is still very popular within the broad base of middle-class Americans who vote Republican. She was, without a doubt, the phenomenon that drew the crowds of tens of thousands to McCain-Palin campaign events. I think she also knows that she is still very popular outside of the circle of die-hard Republicans. During the final weeks of the 2008 Presidential election, a significant number of Americans, whether or not they all agreed with Sarah Palin’s personal beliefs, found Palin’s humble roots, impressive accomplishments, and devotion to her family all enormously appealing. And these same people were shocked and disgusted by the way she and her family were mercilessly pilloried by the news media and the Hollywood entertainment industry.

Again, this broad appeal is what drove the establishment crazy. No matter how hard the news media tried to portray Palin as a clueless idiot, no matter how hard liberal opinion writers tried to convince their readers of Palin’s ignorance and unpreparedness for the office of Vice President, no matter how hard entertainers tried to portray Palin as an uncouth denizen of the redneck culture that thrives on teenage pregnancy, firearms, and Bible-thumping, Sarah Palin’s popularity remained unchanged. The greatness of the liberal establishment’s success in transforming Barack Obama into The Messiah was embarrassingly squelched by the thoroughness of their failure to destroy Sarah Palin’s grassroots appeal.

As our own Hugh S., Kim, and many other conservative pundits have stated, Palin’s effectiveness will be much greater whenever she becomes a private citizen. Americans have little patience for high-profile figures who deliberately savage ordinary citizens, and (as Hugh S. noted) the misogyny and contempt for special needs children that has saturated much of the anti-Palin bile spewed by liberals has left a bad taste in the mouths of the American public, and could horribly backfire in the near future if it is not discontinued.

The conservative movement in this country needs a strong figure to rally around, if for no other reason than to counter the massive cult appeal of Barack Obama among the liberal chattering class. I believe that Sarah Palin could become such a figure, even if she does not run for elected office again. She has the ability to galvanize the conservative movement and organize it around a set of positive, proactive goals, which is what conservatism needs right now. The Cult of Obama has too great a hold on American popular culture for conservatives to simply be “against” the Obama presidency.

Whatever her new calling turns out to be, I wish her all the success in the world. She has certainly done enough to earn it.

ADDED: I thought this observation from The Bosque Boys was worth noting:

Prediction: Sarah Palin will never be president of the United States.

However, there is no reason why she can’t be a Republican Al Gore, beloved and admired on her side of the aisle and reviled and ridiculed by her irate opponents. Remember, Vice President Gore has reportedly earned $100 Million during the years following his defeat in 2000. Like Gore, Palin will always have star power and the ability to draw a crowd. We can expect her to use her influence on the party faithful when needed, and we can also expect her, like Gore, to continually dangle the prospect of running for president before the press and her faithful boosters (but my hunch is, ultimately, she will never pull the trigger again on a all-out run for the big prize).

All she needs now are a “few inconvenient truths.”

And Now For Something Completely Familiar...
Sarah Palin Not Subject of FBI Investigation 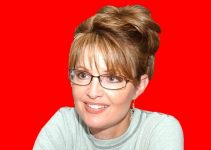