In case you’re unclear about what Cap and Trade is, let me offer some information that might shed some light. Cap and Trade is a tax. It’s a big, big tax. This is probably the most accurate description of Cap and Trade that I’ve seen and explains it far better than I could (emphasis mine):

What is “Cap and Trade”?

It is a lie. But not just a lie. It is also theft, socialism, dirt-worship. Big Government, extremism, impoverishment, fantasy and disempowerment.

Cap and Trade is a gargantuan regressive tax and oppressive regulatory scheme of energy rationing. It forces businesses to buy permission slips from a “central authority” to both create and then use energy, a double tax.

Why not just call it an Energy Tax? Because taxes are unpopular. It’s called “Cap and Trade” because “Tax and Regulate” is too honest. It is touted as a free market solution to pollution…if by “free” we mean mandatory and by “market” we mean “government”.

Once businesses are forced to buy these energy-rationing coupons or permission slips to create jobs, those slips will have value, not unlike a liquor license. Although they really have no value in and of themselves, businesses would then be unwilling to repeal this tax and lose their investment. And it would be woven into treaties, making it difficult to ever again regain our sovereignty, thus disempowering Americans.

Why do all this? Well, first, I’ll give you the stated purpose; to lower carbon dioxide levels, the gas you exhale, and therefore lower the Earth’s thermostat by a degree or two.

That is madness. We do not control the weather, despite the God-sized egos in Washington DC.

The comparison to a liquor license is a good one, especially since these companies will be forced to compete over a limited supply of carbon credits much like people must compete over a limited number of liquor licenses. The price of energy will sky rocket as anything does that operates under limited supply but limitless demand. As a result, the American people are not going to sit for that. They will very be angry and will take it out on their representatives. So what would government run by liberals do in this situation? I predict they would probably do the worst thing possible: cap consumers’ energy costs, which would only compound an already bad situation. The cost of producing energy will still be high but the cost that the consumers pay is capped. The result would be much like what you see in California: rolling blackouts, especially in large populated areas. This is just speculation on my part, but I think it’s an accurate prediction.

By the way, GE, the parent company of NBC, is lobbying the Obama administration to be the “central authority” that the above article references, which is why CNBC, MSNBC, and NBC have been so friendly in its coverage of the White House

Obama and many Democrats don’t want you to know that Cap and Trade is a massive tax, but it is and they know it. Here’s Democratic Representative John Dingle:

So, how much would it cost the typical American household? According to a study at MIT, about $3,900 per household per year:

But, as the saying goes, a lie can make its way halfway around the world while the truth is putting its shoes on. During a lengthy email exchange last week with THE WEEKLY STANDARD, MIT professor John Reilly admitted that his original estimate of cap and trade’s cost was inaccurate. The annual cost would be “$800 per household”, he wrote. “I made a boneheaded mistake in an excel spread sheet. I have sent a new letter to Republicans correcting my error (and to others).”

While $800 is significantly more than Reilly’s original estimate of $215 (not to mention more than Obama’s middle-class tax cut), it turns out that Reilly is still low-balling the cost of cap and trade by using some fuzzy logic. In reality, cap and trade could cost the average household more than $3,900 per year.

The $800 paid annually per household is merely the “cost to the economy [that] involves all those actions people have to take to reduce their use of fossil fuels or find ways to use them without releasing [Green House Gases],” Reilly wrote. “So that might involve spending money on insulating your home, or buying a more expensive hybrid vehicle to drive, or electric utilities substituting gas (or wind, nuclear, or solar) instead of coal in power generation, or industry investing in more efficient motors or production processes, etc. with all of these things ending up reflected in the costs of good and services in the economy.”

In other words, Reilly estimates that “the amount of tax collected” through companies would equal $3,128 per household–and “Those costs do get passed to consumers and income earners in one way or another”–but those costs have “nothing to do with the real cost” to the economy. Reilly assumes that the $3,128 will be “returned” to each household. Without that assumption, Reilly wrote, “the cost would then be the Republican estimate [$3,128] plus the cost I estimate [$800].”

But do we really expect the Obama administration to return those tax revenues when he’s got his national health care program and other big government programs that he wants funded? And what kind of tax revenues are we talking about anyway? This kind:

The deputy director of the White House National Economic Council, Jason Furman, is giving us a glimpse at the real number, telling Senate staff the energy tax scheme would actually raise “two-to-three times” the budget’s official $646 billion revenue estimate. Dow Jones reports that 5 people at the meeting confirmed the statement–we can be pretty sure he said it.

Just imagine the impact a tax increase of that size would have on our economy. For states that use coal as a big source of energy, like the midwest, you can expect this kind of result:

President Barack Obama’s proposed cap-and-trade system on greenhouse gas emissions is a giant economic dagger aimed at the nation’s heartland — particularly Michigan. It is a multibillion-dollar tax hike on everything that Michigan does, including making things, driving cars and burning coal…

Doing so will drive up the cost of nearly everything and will amount to a major tax increase for American consumers.

Such a tax will hit the Midwest particularly hard, which is why House Minority Leader John A. Boehner, R-Ohio, told the New York Times, “let’s just be honest and call it a carbon tax that will increase taxes on all Americans who drive a car, who have a job, who turn on a light switch, pure and simple.”

The carbon tax will be paid by energy companies, manufacturers and public utilities, who will pass the cost on to their consumers. Michigan will be especially targeted. It gets 60 percent of its electric power from coal plants, and the state’s economy is still reliant on heavy manufacturing such as car and truck assembly and auto parts production.

Michigan will lose as carbon tax money is shifted to states with a greater presence of high-tech and service businesses.

The proposed tax would take effect in 2012 and has the very real potential to throw the nation back into recession, if indeed the expected recovery has arrived by then. It’s impossible to raise costs for such basics as manufacturing and energy production by more than half a trillion dollars over a decade and not have the effects felt across the economy.

And this does not just affect the Midwest. Anyone who uses energy will be affected, and that is, well, everyone. Unless you’re willing to go off grid. Then again, good luck getting a home loan for a house that’s off grid. I wouldn’t be surprised to see the sale of generators go up, but the fuel you’ll have to buy for the generator will go way up, as well, so that may not be a great alternative. No matter what, the government will get you. I should be happy that I live right in front of a small dam which generates all the electricity in our area, but I’m sure the long arm of the government will find a way to apply the cap and trade tax to us, too.

The president of Czech Republic Vaclav Klaus is trying as hard as he can to knock some sense into European leaders that a cap and trade scheme is the absolute wrong headed thing to do at any time but especially when you’re faced with a world recession:

So I am amazed to see people going along with the currently fashionable political argument that policies such as cap-and-trade, government mandates and subsidies for renewable energy can actually benefit an economy. It is claimed that government, working together with business, will create “a new energy economy”, that the businesses involved will profit and that everyone will be better off.

This is a fantasy. Cap-and-trade can only work by raising energy prices. Consumers who are forced to pay higher prices for energy will have less money to spend on other things. While the individual companies that provide the higher-priced “green” energy may do well, the net economic effect will be negative.

It is necessary to look at the bigger picture. Profits can be made when energy is rationed or subsidised, but only within an economy operating at lower, or even negative, growth rates. This means that over the longer term, everyone will be competing for a piece of a pie that is smaller than it would have been without energy rationing.

This does not auger well either for growth or working our way out of today’s crisis.

I wish President Klaus could find his way to America because we need more thinkers like him here. Right now our government is populated with a bunch of emotional, that’s-not-fair! control freaks who are busy at work trying to micromanage every aspect of our lives.

Pirates Try to Take French Ship; Fail Again
Bill Whittle: The Cost of Media Bias and The True Story of the Atom Bombs 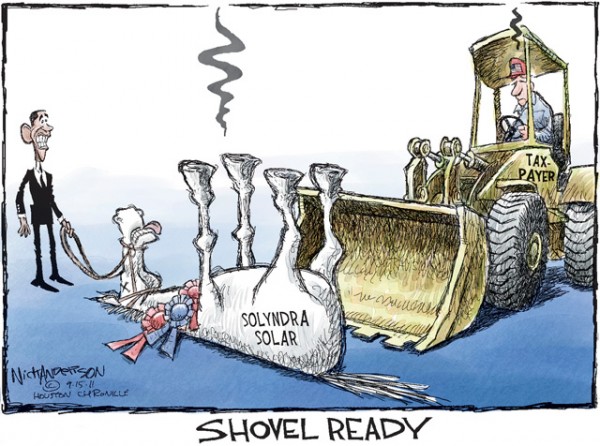