In case some of you don’t know this little tidbit about Governor Kathleen Sebelius, the Secretary of Health and Human Services for the Obama administration, here’s a doozy for those who give a damn.

Kathleen Sebelius is a staunch supporter of abortion rights (though she is against capitol punishment. Go figure.).

The one glaring aspect of her abortion addiction is her support of Dr. Tiller, or as they call him, Tiller the baby killer.

Notorious for preforming late term abortions, he’s been accused of aborting fetuses up to and past 22 weeks old because of the mothers’ “temporary depression.” (What?)

I would call that blood money well spent.

He was personally invited to the Governor’s mansion for a party in 2007. Which, I’m sure over clams and stuffed mushrooms, they talked of how they could further their radical abortion agendas.

“I think for me and alot of other people,there are certain unalienable rights for a person, but those are not applied in-utero.”

Gee, there’s a woman with some fine moral bearings.

For a taste of just what Dr. Tiller has to offer, here is a small gallery of an aborted fetus with happy couple acting as if they just did a noble act.

These are graphic photos. But, more accurately, it is just bizarre.

Remember these next time you see Secretary Sebelius.

Wichita abortionist George Tiller offers a memorial service in his facility after he performs a partial-birth abortion. The mom and the dad in the pictures below paid Tiller a few thousand dollars to kill Tess, their baby girl. A pro-life sidewalk counselor had failed in her effort to dissuade the mother from entering the abortion mill, but did succeed in giving her address to the mom. Afterward, the mother and the pro-lifer corresponded and became friends. In that way, the pro-life community obtained these photos. We at KGOV.com have decided to share with our listeners the mother’s pain, and the photographic proof of the depravity of abortionists, in hopes of furthering our battle against legalized child killing. Little Tess, in swaddling clothes, with a beautiful rose, a teddy-bear, and a picture of Jesus, all implements to soothe the guilty conscience of the parents who have just killed their unique and precious daughter. In the above picture, the little girl’s daddy is giving her a teddy bear, perhaps for her to play with in George Tiller’s incinerator, which he uses to economically dispose of the bodies. Tess’s mouth and nose are twisted. Hillary, Hollywood, Homosexuals, and Humanists support this, called partial-birth abortion. George Tiller used a a forceps to pull Tess’s legs through the birth canal, and then delivered her breach, but stopped just before her head came out. He pauses at that point to first kill her, before delivering her all the way. Why? In a condemnation of America’s Republican U.S. Supreme Court, he can kill her with impunity while her head is still within the mother, but a few inches further and he exposes himself to the crime of murder. With her head still inside, and Tess moving her arms and kicking her legs, Tiller pierced the back of her neck with a sharp instrument and then inserted a vacuum to suck our her brains. Now dead, he collapses her skull, and only then removes her from the protection of her mother’s womb.

The mom who here cradled her baby’s corpse paid to have her daughter killed because she had cystic fibrosis. Tess now has a sister, born in early 2000, who also has CF, but the precious little baby sister was spared, and not executed for her crime of being sick. 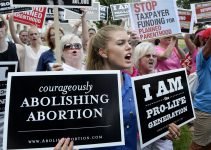