The liberal responses to the Tea Party protests can be described as lame, clueless, angry and scared.

First there was the lame attempt to organize a counter protest, but that flopped pretty spectacularly.

When people turned out all over the country in the thousands to attend tea parties, the explanation from critics was that the protests were from “fake” grassroots, not “real” grassroots. Those people didn’t get in their cars, take time from work, find parking in downtown cities, show up in the rain, etc. on their own. NOOOOO! Fox News did it all. Fox somehow has control over those people and forced them, against their will, to go to the trouble to make signs, interrupt their normal activities, pack up the kids and their diaper bags and strollers, travel to their nearest tea party site, find a parking space, walk to the protest area and raise their signs and their voices. No wonder they fear Fox so much. Fox’s control over their viewers is un-freaking-believable. And Fox is the number one cable channel.

Obama’s Making Work Pay tax cut reduces income taxes for the vast majority of families by $800 this year. The RNC is distorting the truth with the help of ally FOX News, and some misguided Americans are buying it.

Our goal is to let FOX News know that Americans are fed up with their bias and misinformation.

With your help, we will build a coalition which proves that the Teabaggers are not the silent majority but far-right radicals.Not just lame, but ignorant and uninformed. That is not what the tea parties are about. They are about opposition to our tax money being spent in a reckless, foolish fashion and at an unprecedented rate, tripling the deficit with thousands of earmarks and tons of pork. They are about a bunch of politicians who signed onto a spendulus bill they didn’t bother to read and that they rushed through before anyone else had time to read either. They are also about the government taking over private enterprise — determining the salaries of privately employed individuals, demanding resignations from US executives and even getting into the business of guaranteeing our automobile warranties.

It’s not rocket science. Read a few of the signs and you really should “get it.” Stop the spending. Get out of our business. Let us keep more of the money we make. Stop the bailouts. Just common sense. Are they really this blind and ignorant or do they just refuse to let their followers know what is really at issue?

Even more lame: Silly, nasty little jokes about “teabagging.” If you don’t understand the reference you can look it up here where you will also see this definition of a “teabagger:”

2. n. A conservative activist who is so ignorant that they protest against tax cuts (that benefit them) by throwing tea into a river.

Billy Ray cheered while he watched the teabaggers protest on FOX news.Did any conservatives throw tea into any rivers today? Does any tax that adds thousands of dollars of debt to your grandchildren and gets spent on pork really “benefit” anyone who works for a living?

I did an unusual thing tonight that not many people do. I watched Keith Olbermann. He is one of the most clueless of all. He kept trying to make the point that those attending the tea bag protests were stupid because they did not realize that they are really getting so much more for their taxes than they realize. He pointed out that Texans got back a certain amount of cents on every dollar they sent to Washington. This is NOT what the protests are about. Many would gladly turn down those funds coming from Washington (and some governors are doing just that) because they don’t want the federal control, or would prefer not to spend their grandchildren’s money to bail out Wall Street bankers or people who bought houses they couldn’t afford or to make up for the taxes that Obama nominees neglected to pay the IRS. People do like to get government freebies. Heck, they figure they are paying out the rear so they might as well get something to show for it, but I think that mentality is on its way out. Americans are waking up to see the ultimate cost, not just to them, but to their children and grandchildren and to their freedom, is not worth it.

Olbermann is perpetually angry and snide, that’s his shtick, but one CNN employee took the cake as the rudest bully I have ever seen masquerading as a reporter. Behold.

Did you catch the recurring theme? The “reporter” tried to tell the protester how much money the Obama administration was giving him. Sigh. They just honestly don’t have a clue. It almost makes you feel sorry for them, doesn’t it?

Update: Just another thought… when liberal unions bus people to protests and when liberal groups pay people to protest, the media does not deem it worth reporting. But if a cable news channel decides to cover (and announces that they will cover) a protest taking place in all 50 states there is a sinister plot. The media does not know what to think of the tea parties and they are freaking out. In the process they are, once again, providing irrefutable evidence of their extreme bias.

Update II: Doug Ross compares the coverage CNN and other MSM gave the tea parties to the coverage given to Cindy Sheehan and Code Pink protests against the war in Iraq. 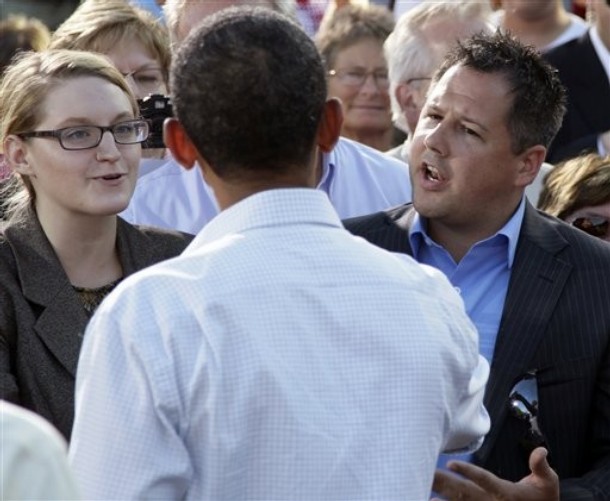