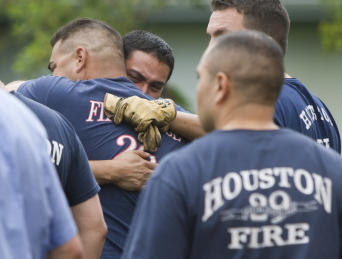 12:03 AM, Easter Sunday, Southeast Houston – The 911 call was like many that came before it and which would follow; a simple but dangerous house fire. Station 26 dispatched two trucks, as normal.

12:07 AM – A four-minute trip and the firemen arrive at a single-story brick home at Oak Vista and De Leon streets, among them Captain James Harlow and rookie firefighter Damion Hobbs, recently returned to the US from serving a tour in Iraq with the US Army.

12:15 AM – As firefighters battled the blaze, the flames subsided quickly and it appeared the fight would be an easy one. Captain Harlow, speaking with neighbors, learns that two elderly people live in the house and were not seen to leave, so he and some other firefighters enter the still-burning house to search for them.

12:25 AM – Winds suddenly become much stronger, and the flames revive, bursting through the roof and moving quickly across the frame. Witnesses later said the flames shot up as high as 50 feet. Because of the intense heat and unpredictable behavior, firefighters are ordered to fall back. As they emerge from the house, the firemen are counted.

12:30 AM – A second roll call confirms that Captain Harlow and Probationary Firefighter Hobbs are still in the house. The flames remain too intense and the winds too high for firefighters to re-enter the home to search for their comrades. The couple who live in the house are found safe outside, having escaped before the fire department arrived. They did not know that firemen had been looking for them.

1:10 AM – Firefighters are finally able to enter the home and search for the missing men.

1:20 AM – The bodies of James Harlow and Damion Hobbs are found and brought outside. CPR is attempted on the lawn, but is fruitless. Firemen form a ‘wall of honor’ as the bodies are carried to ambulances.

2:00 AM – Mayor Bill White arrives and speaks to firemen. The crew of Station 26 finishes clean-up of the area and works out the rst of their shift without incident.

You may notice the word ‘hero’ used a lot in various ways. It’s often used by politicians and media people to describe celebrities and sports figures. I submit that the word should be reserved for someone who daily puts everything on the line in order to make a difference for others. Medals and honors may be awarded for all sorts of actions, but there are few true heroes. Sadly, many real heroes are distinguished by the cost of their valor. A neighbor at the scene of the fire sadly observed that she never thought the firemen could be in danger, she said everyone “sort of thought they were invincible … we never imagined this could happen”. Captain Harlow served nearly three decades as a fireman, and Firefighter Hobbs served his country in war before completing his fire academy training to serve his community in this most demanding vocation. These are true heroes, against whose example few men can measure. May God grant their families peace and comfort for their loss, and indeed we are poorer for having lost such men, though richer to have been blessed that such men would give their best talent and devotion to service.

Don't Bail Out Losers
Polly Put The Kettle On