Home
Global Warming
We Are So Screwed

I find this article to be, well, pretty damned funny, in a scary way.. (Emphasis mine.)

The “Obama administration” and “radical” in the same sentence? Dare you say!

John Holdren told The Associated Press in his first interview since being confirmed last month that the idea of geoengineering the climate is being discussed. One such extreme option includes shooting pollution particles into the upper atmosphere to reflect the sun’s rays. Holdren said such an experimental measure would only be used as a last resort.

Isn’t that kind of what we are supposedly doing already?

John P. Holdren is the Teresa and John Heinz Professor of Environmental Policy at the Kennedy School of Government at Harvard University.

Yes, the Teresa Heinz-Kerry, cosmopolitan spouse of the hairy empty suit, John Kerry, that there Senator of Massachusetts. Should tell you something about Harvard, too.

“It’s got to be looked at,” he said. “We don’t have the luxury of taking any approach off the table.”

Holdren outlined several “tipping points” involving global warming that could be fast approaching. Once such milestones are reached, such as complete loss of summer sea ice in the Arctic, it increases chances of “really intolerable consequences,” he said.

Twice in a half-hour interview, Holdren compared global warming to being “in a car with bad brakes driving toward a cliff in the fog.”

What a coincidence! Both require the reflection of idiots.

National Academy of Science is making climate tinkering the subject of its first workshop in its new multidiscipline climate challenges program. The British parliament has also discussed the idea.

Hmm. Scientists and bureaucrats involved in “climate tinkering”. What could possibly go wrong with that?

The American Meteorological Society is crafting a policy statement on geoengineering that says “it is prudent to consider geoengineering’s potential, to understand its limits and to avoid rash deployment.”

But Holdren noted that shooting particles into the air–making an artificial volcano (!) as one Nobel laureate has suggested–could have grave side effects and would not completely solve all the problems from soaring greenhouse gas emissions. So such actions could not be taken lightly, he said.

Still, “we might get desperate enough to want to use it,” he added.

Another geoengineering option he mentioned was the use of so-called artificial trees to suck carbon dioxide–the chief human-caused greenhouse gas–out of the air and store it. At first that seemed prohibitively expensive, but a re-examination of the approach shows it might be less costly, he said.

Some great pre-emptive fearmongering. And logic! Oh, the logic!

Artificial volcanoes? Artificial trees? How about some artificial intelligence?

Perhaps they could “geoengineer” Obama’s brains to his ass. 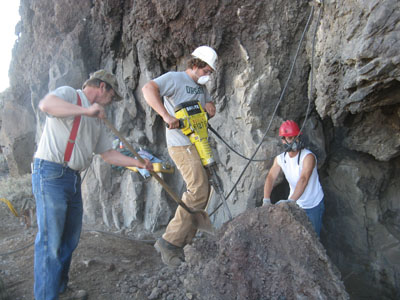