More is going on in the brouhaha over the excommunications that took place in the aftermath of a 9-year-old Brazilian girl’s abortion.

An influential prelate said Brazilian doctors didn’t deserve excommunication for aborting the twin fetuses of a 9-year-old child who was allegedly raped by her stepfather because the doctors were saving her life.

The statement by Archbishop Rino Fisichella in the Vatican newspaper Sunday was highly unusual because church law mandates automatic excommunication for abortion. Fisichella, who heads the Vatican’s Pontifical Academy for Life, also upheld the church’s ban on abortion and any implications of his criticism of excommunicating the doctors and the girl’s mother weren’t clear.

Fisichella argued for a sense of “mercy” in such cases and respect for the Catholic doctors’ wrenching decision, and strongly criticized fellow churchmen who singled out the doctors and mother for public condemnation.

“Before thinking about excommunication, it was necessary and urgent to save her innocent life and bring her back to a level of humanity of which we men of the church should be expert and masters in proclaiming,” Fisichella wrote.

Let me first thank Wizbang contributor Seth for bringing this news to my attention.

I’ve done an internet search for the article in question. What I found is here. Articles published this week haven’t been put on the web yet. When Archbishop Rino Fisichella’s article is made available, I’ll post it.

Archbishop Fisichella is right. There was a lack of mercy shown to the rape victim. First assaulted by her stepfather, made pregnant, having to undergo, then to top it off have her mother excommunicated because she wanted to save her life. I along along thought that the best course of action by Archbishop José Cardoso Sobrinho would have been to stay silent, or excommunicate the stepfather also. Ultimately God is going to rule whether the abortion was right or not.

But Fisichella criticized the archbishop’s public denunciation, writing that the girl “should have been above all defended, embraced, treated with sweetness to make her feel that we were all on her side, all of us, without distinction.”

Fisichella stressed that abortion is always “bad.” But he said the quick proclamation of excommunication “unfortunately hurts the credibility of our teaching, which appears in the eyes of many as insensitive, incomprehensible and lacking mercy.”

Archbishop Sobrinho’s utter lack of mercy hurt the Roman Catholic church in the country with the biggest Catholic population in the world. It will be interesting to see if he backs down from what he said.

In addition to Archbishop Rino Fisichella, two French bishops have voiced their disagreement with the actions of the Brazilian bishop. More important than that is this reaction coming out of Brazil.

Brazil’s Catholic bishops conference denied that the archbishop of Recife and Olinda, Jose Cardoso Sobrinho, excommunicated the mother and doctors who practiced a legal abortion on a 9-year-old girl that was pregnant with twins after being raped by her stepfather.

The secretary general of the bishops conference, Dimas Lara Barbosa, said that the prelate “at no time excommunicated anyone.”

The case won notoriety and sparked a controversy between Brazilian President Luiz Inacio Lula da Silva, who defended the medical position of saving the girl’s life because of her pelvic incapacity to continue with the high-risk pregnancy, and the Catholic hierarchy, backed by the Vatican.

“People who consciously work to stop a birth are placing themselves outside the communion of the church, because they no longer share the Christian philosophy, which is in defense of life,” Lara said. “We don’t know who does or does not have this act on his conscience.”

The president of the bishops conference, Cardinal Geraldo Lyrio Rocha, commented that “excommunication is not synonymous with condemnation to hell. I say that because in the popular imagination, when someone was excommunicated it seemed he was being sent to hell.” EFE

No excommunication happened. You can take that as a public rebuke of Sobrinho’s actions or some damage control being done by the Roman Catholic church in Brazil. I think its a little of both but mostly a slap in the face for a Archbishop who went too far. The Brazilian Bishops conference acted correctly. Its time for the wounds to heal that were created by a few very foolish people.

One shot
It's Amazing how Suddenly Things can Change 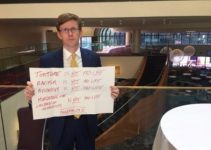