Home
China
The Knucklehead of the Day award

Today’s winner is China Central Television aka CCTV. They get the award for the following–

BEIJING – China’s state-run television broadcaster apologized Tuesday for an unlicensed fireworks display that sparked a blaze that destroyed a luxury hotel in the network’s headquarters complex in downtown Beijing. 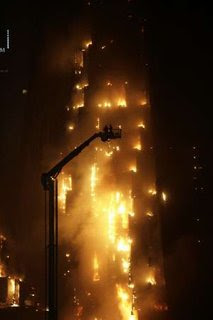 The fire, which sent off huge plumes of black smoke and showered the ground with embers, left one firefighter dead and a handful of others injured, the official Xinhua News Agency said. The blaze was put out early Tuesday after burning for more than five hours at the unfinished Mandarin Oriental hotel.

Xinhua quoted Luo Yuan, a spokesman for the Beijing fire department, as saying that fireworks set off to celebrate the Lunar New Year were to blame for the fire that destroyed the nearly finished Mandarin Oriental hotel.

He was quoted as saying CCTV had hired a fireworks company to ignite several hundred large fireworks in an open area by the hotel. Video footage posted on Youtube showed spectacular bursts of fireworks above the top of the building in downtown Beijing.

“According to the Beijing fire department, this fire occurred because the person in charge of the construction of the new building project of CCTV, without permission, hired staff to set off fireworks that violated regulations,” China Central Television said in a statement on its Web site.

CCTV said it was deeply grieved “for the severe damage the fire caused to the country’s property.”

Carelessness and stupidity took a life and caused millions of dollars of property damage. The Chinese would be wise to make sure the hotel owners are properly reimbursed. Nothing scares off foreign investors quicker than the risk of losing your investment without compensation.

In the meantime I name China Central Television aka CCTV today’s Knucklehead of the Day. Below the fold is a video of the fire.

From crisis to catastrophe, and (hopefully) back out again
Obama Voters' Remorse