What is so controversial that golfer Anna Rawson felt a need to apologize? From the Sydney Daily Telegraph–

AUSTRALIAN glamour girl Anna Rawson said she was trying to promote golf in a radio interview in which she referred to past female players as “dykes”. 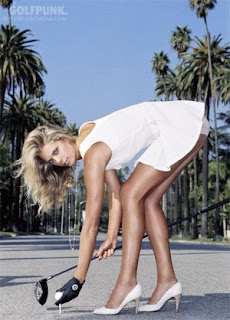 She came under fire for her poorly chosen comments aired by NOVA 5AA in Adelaide on Wednesday.

“The tour has got so much better with so many young stars and great players,” Rawson told the radio station in an interview arranged by her father Jim. “But the mentality unfortunately amongst the media and the industry hasn’t changed.

“They still think we’re at 25 years ago when the tour was full of, you know, a lot of dykes and unattractive females nobody wanted to watch.”

Rawson is talking about how the media perceives players on tour. Why should she come under fire?

The word Dyke isn’t considered a slur against a female homosexual. Many lesbians use the word to describe themselves and others.

“I could never be with a woman, because I’m just fascinated by what men can do with their bodies that we can’t,” she said before admitting: “This interview will definitely get me in trouble.”

“I was making a reference to how I feel society sees women’s golf as a whole. I don’t believe that. I wouldn’t want anyone to think that was my opinion and I am sorry I said that, definitely.

“I was making a reference to how women make seven times less than men on the course and 20-to-25 times less on the sponsorship front. It’s amazing how women’s golf has grown and we have many great young players out here, yet society and the media haven’t really caught onto that.

So she can’t ever be a lesbian(I can’t either) and she says the usually lazy media can’t or won’t portray ladies golfers correctly today and the differences in prize money. Was any of this off the mark? No, so why the controversy?

Political correctness run amok. BTW that really is Rawson in the photo above. If you want to see more, I suggest a google images search.