Home
Congress
A Test For Boehner

Boehner should look to the example set by courageous House Republicans in a rare act of solidarity when they voted unanimously to reject Clinton’s budget in 1993. That historic vote (along with the dramatic showdown in the Senate when Vice President Al Gore cast the tie breaking vote) was the cornerstone of a stunning upset strategy a year later when Republicans regained control of the House.

The Republicans are certainly no where close to regaining control of either the House or Senate in 2010, but the process of becoming a majority must necessarily begin with some dramatic statement. That opportunity presents itself today when Republicans can repudiate Speaker Pelosi and Majority Leader Reid by allowing the Democrats to shoulder full political responsibility and risk for this monstrosity of federal spending.

In testimony before the House Budget Committee yesterday, Alice M. Rivlin, who was President Bill Clinton’s budget director, suggested splitting the plan, implementing its immediate stimulus components now and taking more time to plan the longer-term transformative spending to make sure it is done right.

The Boehner strategy should be ideologically grounded in the fact that lower taxes and reduced federal spending are far more effective tools in stabilizing a faltering economy. President Obama, in his meeting with Republicans yesterday, signaled that he might consider a reduction in corporate tax rates if loop holes and special interests were eliminated:

“Republicans praised Obama’s conciliatory tone and his willingness to listen to their ideas, while Obama offered an olive branch on taxes by telling the House conference that he could agree to lower the corporate tax rate if they agreed to close corporate tax loopholes.”

Republicans should exploit this opening by drafting an alternative bill that includes closing loopholes for corporate and special interests (almost all of which constituencies are being well fed at the TARP trough) and proposing a reduction in corporate taxes. Lowering corporate taxes will have a more immediate impact on job creation than anything included in the stimulus plan proposed by the Democrats.

For the Republicans to regain power in Congress they must first establish credibility with their base (which they squandered over the last ten years by trying to govern like Democrats.) Today is their first chance to begin that process. Clearly they cannot overcome Democrat majorities, but repairing the relationship with core conservatives is more important. 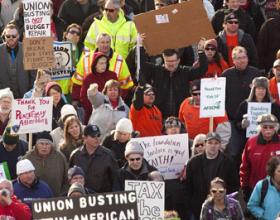