As Barack Obama finishes his first term as President-Elect and gets ready to suit up for the real thing, debate has come up between conservatives and liberals regarding the respect due him. Conservatives cite the constant derision and undeserved insults heaped upon President Bush and say that the Democrat is only getting a dose of what the liberals considered reasonable treatment of the Chief Executive for the last eight years. Liberals respond by saying that they gave Bush a fair chance, and did not begin attacking him until he had earned it, that they were not spitting insults before he even began his term.

I do not agree with the deliberate disrespect against Obama, but the liberals are lying to pretend they ever gave President Bush a chance.

Thousands of liberals protested Bush’s inauguration, pelting his motorcade with bottles and at least one egg. 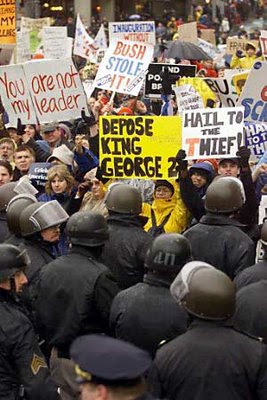 Before he even took office, mockery of him was common among liberals.

The fact is simple – liberals refused to show respect at all to President Bush, so while it would be better for conservatives to try to work with Obama and give him a chance to do his job, it is absolutely false for liberals to pretend they have any right to expect it. If Obama never catches a break as President, he can thank his liberal base for poisoning the well.

Comes around, again
Too little, but not too late.