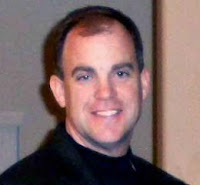 Last week I wrote about a wedding. Today, I must write about a funeral. Or rather, about a man whose death should not pass without remark. And about the sort of ideals and purpose which make such a man.

Sunday, December 7, 2008, Houston police officer Timothy Abernethy was gunned down by a man who fled after being stopped for a traffic violation. After surprising the officer and shooting him three times, witnesses say the suspect walked back to the fallen officer and shot him again at point-blank range in the head.

By itself, this would be a tragedy, a public servant killed by a young man throwing his own life away. But Tim Abernethy was not ordinary by any means. A twelve-year veteran of HPD, Abernethy had volunteered to work overtime to help fight crime in the community. Abernethy was also a veteran of the US Navy (his son also enlisted, and attended his father’s funeral in his navy uniform), who had worked on bike patrols and community support groups in order to help folks directly.

About four thousand people attended Officer Abernethy’s funeral on Friday. When trying to give a sense of what kind of man Timothy Abernethy was, Chaplain Montgomery “illustrated the theme by telling of his encounter with a Houston policeman who had been comforting members of the slain officer’s family at a local hospital. As Montgomery approached, the officer bolted. Concerned, Montgomery followed, finally finding the officer in a hallway with his face pressed to the wall. Under gentle coaxing, the officer confided his emotions.

“He looked at me and the look in his eyes bespoke the love he had for this man,” Montgomery said.

After Abernethy’s murder, hundreds of citizens held a candlelight vigil where he died, promising that his death would have meaning. The next day it snowed in Houston for the first time in two decades. “One fellow officer recounted how Abernethy loved the snow but did not live to see this week’s rare Houston snowfall. He told mourners this snowfall is a sign that Abernethy is OK now in heaven.”

Roger Zelazny once wrote a story about a man whose ideals never dimmed, even when the things he prized were forgotten or mocked by all around him. Zelazny called that man ‘The Last Defender of Camelot’, and in this I disagree slightly with Mister Zelazny. Men like Timothy Abernethy prove that ideals such as personal honor, valor, sacrifice for a worthy cause, and dedication to the defense of community and nation, while rare and always in too short a supply, have not died out nor even diminished to the one last futile stand, but remain vital and alive, the mantle taken up by the new generation in honor and memory of the fallen heroes who taught them these ideals. In this way Camelot never dies, the hopes and integrity built upon the past deeds of integrity and courage, in defense of and in support for the people who depend, as always, on the few who truly face evil and fight it every day.

A Couple of Good Weeks for Republicans
Brother, can you spare a Senate seat?