Flying can be adventurous sometimes.

Two Hong Kong Airlines pilots have been sacked after trying to take off from a taxiway rather than the main runway at the city’s airport, according to a report.

The pair, an Indonesian captain and Argentinian co-pilot, were only stopped by an alert air traffic controller who saw them speeding on the taxiway and warned them to stop, wrote the Sunday Morning Post.

Their Boeing 737 was carrying 122 passengers and seven crew, the report said.

The flight, bound for Cheongju in South Korea from Hong Kong International Airport, took off after the aborted attempt on September 13.

Taxiways at the airport run the full length of the runways but are narrower, have green lighting and no lights down the centre, the paper said.

The two were dismissed after an investigation by the southern Chinese city’s Civil Aviation Department, which recommended improvements to lighting and marking at the airport, one of Asia’s busiest.

The pilot told management he was not making a takeoff and was merely travelling at speed, the report said.

Just based on the name of the airline, I’m guessing the pilots were based out of Hong Kong. Then their actions are inexcusable. They would know what is and isn’t a runway at Hong Kong airport. 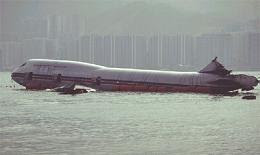 I’ve been to both of Hong Kong’s airports. Until 1998 Kai Tak was the airport that served the former dependent territory of the United Kingdom. Kai Tak was famous for having its only runway jutting into Victoria harbour. This made for exciting or risky takeoffs and landings depending on whether your viewpoint was that of the passenger’s or the pilot.

Because of the one runway and its location, landings at Kai Tak took a lot of skill. Otherwise you could end up like this flight. In Hong Kong harbor. A less than year old 747 was totaled when its pilots tried landing in almost typhoon like conditions.

Here’s a fun view of the airport. If I remember correctly, pilots flew in over the city on approach. It had to be quite a ride. 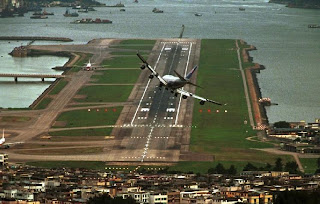 The new airport is less scenic and less scary but incredibly but one of the most passenger friendly I’ve had the privilege of flying through. For our 10th wedding anniversary in 1999, the wife and I visited Hong Kong.

That trip was noteworthy for its the only time I ever had a baggage mixup in my years of flying. When getting our luggage, I picked up the wrong suitcase. It was the exact same type, color, and had a Northwest Airlines priority baggage tag on it. It wasn’t till we got to the hotel that Leonita and I discovered the mistake I made.

More memorable than the baggage mixup for the wife and I, was the room upgrade we got at the hotel we stayed at. A suite overlooking the harbor. When show to the room, the hotel attendant said to Leonita. “Is the room satisfactory?” LOL, I never saw my wife’s eyes go so big in my life as when we were showed that room.

Fortunately our bag was still at the airport, and we were able to make an exchange the next day. I’d put up a photo or two from the 1998 trip but I can’t find the album. Leonita is at a concert, so I can’t ask her at present.

Breaking: Arson at Sarah Palin's church
An eye for an eye