No sign yet of whether or not it’s related to Palin’s vice presidential run. A suspicious fire broke out at Wasilla Bible Church, causing around $1 million in damages.

The blaze at the Wasilla Bible Church broke out as a group of women made crafts inside. It is not yet known if the church was targeted because of Palin’s affiliation. Palin’s spokesperson, Bill McAllister, issued a statement on her behalf after she visited the church on Saturday.

“(Palin) told an assistant pastor that she apologizes if the incident is in any way connected to the undeserved negative attention the church has received since she became a vice presidential candidate on Aug. 29. Whatever the motives of the arsonist, the governor has faith in the scriptural passage that what was intended for evil will in some way be used for good.”

Church members are in shock and have with unanswered questions after what Mat-Su firefighters called the biggest fire of the year. It’s a place of worship to more than a thousand people in the Valley.

But investigators say it’s too early to tell who did what and why.

“At this point in time I can’t go into those details since it is an active investigation,” Central Mat-Su Fire Department Chief James Steele said.

They did say the fire started on the outside of the back of the building with a handful of people inside around 10 p.m.

But the blaze badly damaged what many considered to be a new building, built just three years ago, to the tune of an estimated $1 million.

“At least the floor in one area has actually dropped approximately two feet,” Steele said.

But the church pastor is focusing on the bigger picture.

“I’ve had a lot worst calls at night,” Pastor Larry Kroon said. “When one of your parishioners dies or loses a child, it’s a whole different thing than the building’s on fire.”

Besides a new venue for services, Kroon says the fire changes nothing.

“Chose faith, live with hope and keep caring about people,” he said. “That’s what we’ll do.”
Unless the vandals who did this are caught, then we’re not likely to find out if Sarah Palin’s vice presidential run was actually the motive behind this or not. Unfortunately, given what we’ve seen from anti-Palin fanatics, it’s not a far stretch to think it might very well be just that. It’s a miracle that the women inside the church when the fire was started weren’t injured.

Still, this is a terrible story and I hope whoever did this rots in prison for a long, long time. 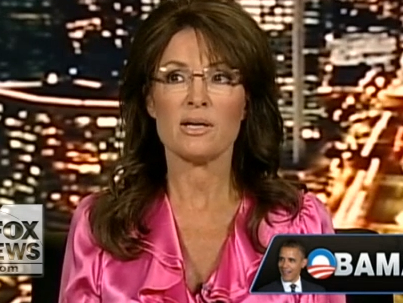