There was a time, when I thought one thing that separated Man from the other animals, was Man’s incredible habit of doing the incredibly stupid on purpose. The pet rock, streaking, and the election of Barack Obama come to mind as obvious examples. But over time I have found that animals can also choose stupid things to do, for no practical reason whatsoever. 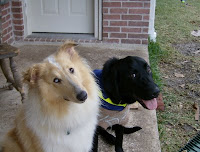 Bingo is a Collie, and Cody is a Black Lab. They are both intelligent, caring and gentle dogs where children are concerned … and the exact opposite where birds are concerned. More than once, a low-flying bird has discovered how fast my dogs can be, and how high they can jump.

So I’m studying for a final exam, and I hear the dogs making a ruckus, and I go out and see … a scene from “The Birds”.

About fifty crows had apparently been migrating, and sat along the fencetop peering at the dogs. The dogs would jump at them and the birds would fly off for a while, then come back. And every so often a crow would make a low pass through the yard, as if daring the dogs to catch it.

Three times I saw a bird lose feathers to a jaw snap, and one bird only survived by frantically pecking at Cody to get his wing free. Yet a few seconds later, here comes another one to try his luck.

It seemed like a crow frat pledge initiation; survive the dogs, buy your pin and the tickets to the next dance, and you’re in.

New Terms of Use for Wizbang
Have a blast