Home
Congress
The Most Bipartisan Congress Ever

Sorry, Nancy, but how can you possibly proclaim that “if the Democrats win, and have substantial majorities, Congress of the United States will be more bipartisan,” if Democrats can’t even be ‘bipartisan’ towards those within your own party?

Sen. Joe Lieberman’s affiliation with Democrats was in question after a meeting Thursday with Majority Leader Harry Reid, steamed over the Connecticut independent’s high-profile support of John McCain for president.

Reid, in a sternly worded statement after the 45-minute meeting, said no official decisions have been made. But an aide to the Nevada Democrat said Reid was leaning toward removing Lieberman as chairman of the Senate Homeland Security and Governmental Affairs Committee. The aide spoke on condition of anonymity because the discussions were confidential.

Well, apparently not that confidential.

Seems the same howling bipartisan spirit displayed by Democrats when in the minority. As soon as they were in the majority, funny thing to find Pelosi sipping tea in Damascus.

But then, that too was bipartisan. For what could possibly be more partisan than a state sponsor of terrorism and the government of the United States of America?

Aside: It’s this Nancy Pelosi at the helm: Parsing Pelosi: Military Usefulness.

She is truly difficult to take, especially around Memorial Day. Add to that Election Day. And Monday. And Thursday. And…

Peace In Our Time
Jay Tea's Evil Thought Of The Day 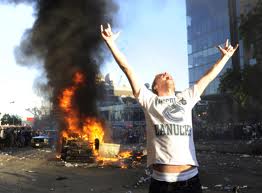