I have written previously, both here and at Townhall, about the Employee Free Choice Act and the issue of card check and how it could become reality if Republicans lose additional seats in the Senate. In my Townhall column I wrote about Elizabeth Dole’s close race here in NC and her challenger Kay Hagan’s labor support. It now appears many are writing off Dole’s chances to hold her seat. With many other Republican Senate seats at risk, there is a real possibility Democrats could hit the magic 60-seat mark. If Democrats win a filibuster-proof majority they will pass the EFCA and workers will lose secret ballot elections and union power will increase dramatically.

Organized labor spent heavily to elect a Democratic Congress in 2006. With the presidency at stake, unions are expected to spend up to $360 million by November, more than twice as much as four years ago.

At the top of labor’s agenda is the misnamed Employee Free Choice Act, which would deny employees the opportunity to vote before a union takes over their workplace.

Today, organized labor represents just 7.5 percent of private employees. Labor officials blame their woes on the fact that they must win a secret ballot to force company recognition. So organized labor proposes doing away with elections if 50 percent of the workers plus one sign a card.

Unions dislike secret ballots, which protect workers from retaliation for rejecting representation. In contrast, labor organizers find it much easier to mislead and harass workers to sign a union card. Bruce Raynor of the union UNITE HERE says simply: “There’s no need to subject the workers to an election.” Ironically, a Zogby poll found that 84 percent of union members believed in certification elections.No need to subject workers to an election? Passage of this act would make it easier for unions to intimidate workers. That goes right along with the attitude of the Obama campaign that is intimidating anyone who opposes his candidacy. The EFCA would make it easier for unions to do what Obama has directed his followers to do to those who don’t agree with them — “get in their face.” More from Bandow’s op-ed including how this would not be good for the economy:

Earlier this year Obama endorsed the “card check” bill, promising: “We’re ready to play offense for organized labor — letting them do what they do best: organize our workers.” Andy Stern, head of the Service Employees International Union, predicted that EFCA would cause unions to “grow by 1.5 million members a year, not just for five years but for 10 to 15 straight years.” More employees mean more dues.

Some of that money would go for organization campaigns. Observes Jack Welch, former CEO of General Electric, EFCA “could trigger a surge in unionization across U.S. industry — and in time, a reversion to the bloated economy that brought America to its knees in the late 1970s and early ’80s and that today cripples much of European business.”

The Heritage Foundation has compiled a list of the number of workers that would be disenfranchised by the EFCA. Here are numbers for a few of the states:

Another Associate Obama Might Want to Disown
Palin to McCain: "Take the gloves off" 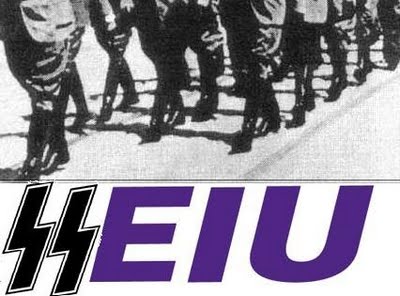