This week’s Weekend Caption Contest™ was another hit with the masses. I really had a struggle picking between the 1st and 2nd place entries, as they were both classic line reworks. I ultimately moved Jeff down a notch because, while Eva works on a show with Teri Hatcher, it would have been the winner if Teri was in the picture. The assignment this week was to caption the following picture: 4) (Faith+1) – “Federline awoke from his dream and realized that, no, Eva was not the drive-in girl. He went back to making fries.“

5) (Baron Von Ottomatic) – “Excuse me, there’s been a mistake. I ordered Salma Hayek.“

(fustian) – “If there were any justice in the world, this would be Nancy Pelosi’s job.”

I Question The Timing, Part I
Rumors Of A Michelle Obama "Whitey" Video Abound 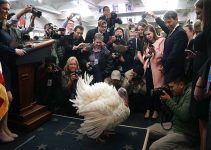