This week’s Weekend Caption Contest™ was another home run. There really were too many good entries to choose just six… Being a (nearly) life-long Padre fan it wasn’t hard for me to pick a winner, I suppose it was just good fortune that most of you chose it as well. Anyway, the assignment this week was to caption the following picture: 2) (Neoluddite) – “On Friday, a photo of Pope Benedict’s visit to the Nationals’ Ballpark was incorrectly captioned as a rally for Senator Obama’s presidential campaign. The Times regrets the error.“

4) (fustian) – “The super delegates are a little full of themselves this year.“

5) (No One of Consequence) – “After months of research, the assemblage of priests and religious scholars delivers the bad news to Cubs fans: Hell has not yet frozen over“

6) (Jeff) – “As the team from the Vatican takes the field, they anxiously look around for “Morganna, The Kissing Bandit” they have heard so much about…“

The Readers Choice Award this week went to vader06’s winning entry. The next highest vote total was for this worthy caption:

That’s it for this weekend. As always, a new edition of the Wizbang Weekend Caption Contest™ will debut Friday morning. 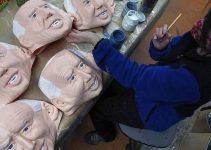