In this update we’ve got snippets about the ACLU’s latest defeat, Katrina insurance coverage claims, and one of those classic criminal law and procedure cases which crop up from time to time, and from which “Law & Order” plot lines and law school final exams can be made.

The Court let stand a decision by the U.S. 6th Circuit Court of Appeals, which had reversed a Carter-appointed trial judge and thereby dismissed a lawsuit filed by the leftist ACLU that was designed to weaken the government’s ability to fight the global war against genocidal Islamic terrorists. To date there have been zero successful legal challenges to the warrantless surveillance program.

The administration unilaterally ceased the program in 2007, placing its anti-terrorism wiretapping activities under the auspices of the FISA Court in Washington, D.C. The FISA Court is made up of federal judges and under various circumstances the law under which it operates requires court approval for domestic surveillance activities. Within the next several weeks the full Congress is expected to approve changes to the FISA system, legalizing warrantless wiretaps when necessary and appropriate, and granting full and retroactive legal immunity to the telecom companies that cooperated with the government in the implementation of the former warrantless program.

Here’s a link to the Associated Press’ version of events, which for obvious reasons is couched in different terms.

The Supreme Court on Tuesday rejected an appeal financed by plaintiffs’ attorneys that sought to reinstate lawsuits against property insurance companies for Katrina-related losses.

The Court let stand a ruling by the U.S. 5th Circuit Court of Appeals, which dismissed en masse a slate of insurance coverage lawsuits on grounds the salient policies did not cover damages caused by flooding. A similar set of lawsuits currently is working its way through the Louisiana state court systems. Today’s Supreme Court decision ends all pending litigation against insurance carriers not incorporated nor with their principal places of business in Louisiana, and possessing policy language equivilent to those to which the prior 5th Circuit appeals court ruling made reference.

Here’s a link to the AP’s version of events, which for various reasons (some are obvious; others require knowledge of the so-called “Erie Doctrine”) is worded quite differently.

* * *
Last but not least, here’s the AP’s summary of a very interesting criminal case:

The Supreme Court agreed Tuesday to consider whether evidence must be suppressed when authorities base an arrest on incorrect information from police files.

The Coffee County, Ala., sheriff’s department took Bernie Dean Herring into custody after being told by another county he was wanted for failing to appear in court on a felony charge.

In a subsequent search, the sheriff’s department found methamphetamine in Herring’s pockets and an unloaded gun in the front seat of his truck.

It turned out that the warrant for Herring’s arrest had been recalled five months earlier.

Herring was sentenced to 27 months in prison after a jury convicted him on federal drug and gun charges.

— That case involves the so-called “fruit of the poisonous tree” doctrine, which is a bane of any 1-L law student’s existence.

— The conservative 11th Circuit Court of Appeals ruled against Herring and thus against the notion the seized evidence should have been suppressed. The Supreme Court very likely will follow suit, presumably in a 5-4 decision with Justice Kennedy casting the deciding vote.

The Gender Gap
Confessions Of A Chickenhawk 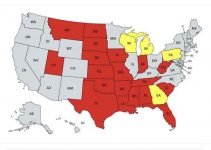