The South Carolina primary is today. Polls open at 7 a.m. This is a Republican Primary only; Democrats left their primary next week to avoid losing delegates (the RNC assessed a 50% penalty for earlier-than-allowed primaries, while Democrats take them all). Since the parties have to run and pay for their own primaries in this state, each can choose their own date.

It does result in massive consolidation of precincts, though, as the parties avoid paying so many poll workers and the fees paid to some locations. In my rural county we will have only about 25% of the usual number of polling places, which is about the average throughout the state. I’ll have to drive an extra five or six miles to vote, and everyone is similarly inconvenienced (except the lucky 25% whose home precincts are being used). Cold temperature – for here, anyway, in the 40s – and rain are expected all day. Turnout could be affected by these conditions.

I’ve remained undecided throughout the campaign season. No candidate excited me; I found, and find, differences with or reservations about them all. My main concern is a qualified candidate who can win in November. To me, that supersedes ideology (especially since none was a perfect match anyway) because any of the Republicans appointing the government positions and judges would be superior to any of the Democrats in those areas, and all except Paul would be stronger on national security.

I was leaning to Giuliani earlier, due mainly to his strong national showing in match-ups with Democrats, and solid positions on defense/security issues and economic issues. Presidents don’t have much direct effect on the major social issues anyway, beyond the judges they appoint, and Rudy satisfied me he would select strict constructionist judges. But he’s slipped in polls since, both of the GOP field and in head-to-heads versus Democrats, and he’s pulled his staff and advertising from the state. I have to scratch him from my list if he won’t compete.

Paul, of course, was never in consideration. Withdrawing all our armed forces from all overseas deployment is simply moronic, for one thing. Too many White Supremacists in his camp for another . . . but the list is long. Forget him.

Romney would have been a prime candidate – mostly conservative positions across the board, successful executive experience in both the private and public sectors – but he left the state and conceded it to McCain TWO DAYS before the primary after spending over $3 MILLION (more than anyone else) here, to go to Nevada, where no one is even competing with him. Sorry, Mitt: What happens in Vegas doesn’t matter to the Lowcountry.

McCain gets my utmost respect for his service to our country. His national security credentials are strong, and he was right about the need to change strategy in Iraq when others resisted (although I have yet to see any evidence he authored the “surge” strategy specifically, other than calling for more boots on the ground generally, although he did have the numbers about right). He’s a spending hawk, and I like that a lot – we need 40 or so more of them in the Senate. He’s dependable on life issues. But his record on taxes is suspect, and he is not a team player. His immigration plan omitted the critical border controls and visa controls almost entirely, and his BCFRA inserts government regulation into political discourse, a horrible idea which made the problem worse, not better. His environmental views seem to come from liberal Democrats. If he’s the nominee, I’ll support him, but there has to be a more conservative choice in the primary.

Huckabee is a good man with a good record on social issues, but he definitely sounds like something other than a conservative when he rails against what private companies pay their employees. His record on taxes is suspect, and I see no evidence of spending restraint. The hundreds of thousands of dollars in gifts he accepted while Governor could become an issue in a general election, as could his disregard for the warnings of prosecutors and victims when pardoning murderers. His lack of experience in foreign policy shows. I’ll support him if he wins, but he will have to win without me.

By process of elimination, that leaves Fred Thompson. Although I don’t agree with him on everything, he comes closer than anyone else. My main reservations about him are that he lacks executive experience, which gives up a trump others might have over the Democratic nominee, and his poor political judgment in not entering the race in the late spring while he had the “buzz” in his favor. The odds are against him winning, which could hasten the end of his campaign, but he’s in it fighting to the end.

I’ll be voting for him in a few hours. 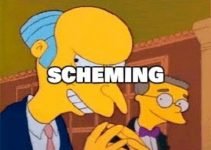