Home
Politics
Turning The Other Cheek

Earlier this week, Mike Huckabee held a press conference. The original intent was to unveil his latest attack ad on Mitt Romney. At the last moment, though, Huckabee thought better of it, and instead announced that he would NOT be airing the ad.

But just in case some folks thought he was bluffing, he ran the ad for the press. Who had their cameras rolling.

Now the ad is getting even more air time than if Huckabee had aired it — without costing his campaign a dime.

I had my own little “hit piece” worked up on Huckabee over this little incident, but I decided it was too mean-spirited, too negative, and set the wrong tone for Wizbang, so I spiked it.

If anyone doubts me and wants to call my bluff, they can check below the fold. Those who are willing to simply take my word for it, my thanks. It isn’t complete — I changed my mind before I gave it a final proofing and inserted documentary links, but it’s fairly accurate of how it would have looked in the end.

With his little stunt this last week (“I have an ad that nails Romney to the wall, but I won’t air it because it’s too vicious — see here for yourself”), Mike Huckabee has revealed himself to be the proper heir to the old-time snake-oil salesmen and revivalist hucksters (no pun intended — well, maybe a little) of days of yore. He’s a modern-day Elmer Gantry.

I’ve had it with him. I have no problems with Christians, or even members of the clergy, but when they put the tenets of their faith above everything else — even common sense — then they’ve crossed the line of Separation of Church And State. Huckabee, while he was governor of Arkansas, issued a metric assload of pardons, clemencies, and the like — mostly to those who found Jesus while locked up. And at least one of those Born Agains ended up killing. Way to go, Mikey.

I’ve also had it with the slippery ethics that seem to be innate with Arkansas governors. Huckabee took hundreds of thousands of dollars in gifts, speaking fees, and just-short-of-bribes from lots of people who had business before the state, and there’s been a remarkable confluence of those who gave the governor extravagant gifts and those who received state appointments.

I don’t like speaking so harshly of a man of the cloth, especially one with a degree in theology. (Oops, his bad — he’s got a degree just like he has John Bolton advising him on foreign policy, just like Bill Richardson once had a major league baseball career, like Hillary Clinton had arranged for the first President Bush to go on a good-will tour with her husband to undo the “damage” his son had caused). But there’s only one group of people who are entitled to “have it both ways,” and Huckabee is NOT a hot chick. (As the old saying goes, “whatever two or more women want to do is fine, as long as there’s at least one man there to watch.”)

Remember, this is Saint Huckabee, the great theologian (well, amateur theologian) who announced that Mormonism taught that Jesus and Satan were brothers.

If in November it comes down to Huckabee or Hillary Clinton, I might have to hold my nose and cast my vote for the carpetbagger over the Huckster. Ideologically, they don’t seem to far apart on the issues that matter to me, but at least with Hillary her sanctimoniousness is far more transparent, and her socialist agenda more easily rejected without the veneer of religion over it.

Phew. I’m so glad I thought better about publishing this piece. It really was too nasty, even for me.

Wait...You Mean Hillary Isn't the Smartest Woman in the World?
Pakistani Cleric: Convert the World to Islam, by Force if Necessary 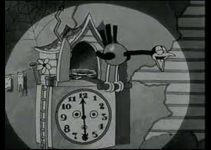