General John Batiste, until recently affiliated with VoteVets, an antiwar veterans’ group, now believes the surge is necessary, and is working. He has joined Vets for Freedom, a group which supports the war effort in Iraq. Batiste and Pete Hegseth write in the Washington Post:

First, the United States must be successful in the fight against worldwide Islamic extremism. We have seen this ruthless enemy firsthand, and its global ambitions are undeniable. This struggle, the Long War, will probably take decades to prosecute. Failure is not an option.

Second, whether or not we like it, Iraq is central to that fight. We cannot walk away from our strategic interests in the region. Iraq cannot become a staging ground for Islamic extremism or be dominated by other powers in the region, such as Iran and Syria. A premature or precipitous withdrawal from Iraq, without the requisite stability and security, is likely to cause the violence there — which has decreased substantially but is still present — to cascade into an even larger humanitarian crisis.

Third, the counterinsurgency campaign led by Gen. David Petraeus is the correct approach in Iraq. It is showing promise of success and, if continued, will provide the Iraqi government the opportunities it desperately needs to stabilize its country. Ultimately, however, these military gains must be cemented with regional and global diplomacy, political reconciliation, and economic recovery — tools yet sufficiently utilized. Today’s tactical gains in Iraq — while a necessary pre-condition for political reconciliation — will crumble without a deliberate and comprehensive strategy.

Read the rest at the above link. How soon will the anti-American left turn on Batiste? They tend not to like it when former “allies” change sides . . . since Batiste has been touted as an “expert” when speaking against the war (and particularly Rumsfeld’s conduct of it), what will they say about him now?

One more complication for congressional Democrats seeking to cut the funding without taking the responsibility . . . why surrender when you’re winning?

Thanks to Ed Morrissey for pointing out this story. 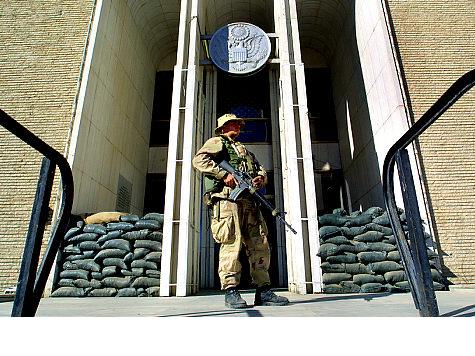