Last week’s Weekend Caption Contest™ generated an impressively large number of entries. In many ways it was like a greatest hits album of caption contests allowing us to return to some old familiar themes. Thanks for the memories…

The assignment last week was to caption the following picture: 1) (WildWillie) – “Congressman Patrick Kennedy calmly got out of the car, locked it, waved to the onlookers then proceeded to the subway train.“

4) (Justrand) – “If John McCain’s presidential campaign were a car!“

(Rodney Dill) – “Damn, I hate teaching skateboarders how to drive.”

The contest is (finally) closed. Winners for the current edition will be announced shortly, and a new edition of the Wizbang Weekend Caption Contest™ will debut Friday morning. 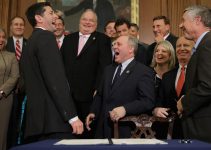