Update: My original title said major correction, but it really isn’t. Four hundred sixteen points is not much of a correction for a market that’s above 12,000 points.

NEW YORK (AP) — The Dow Jones industrial average is down more than 500 points with about an hour of trading left today. The Nasdaq Composite is off more than 100.

A 9 percent slide in Chinese stocks, which came a day after investors sent Shanghai’s benchmark index to a record high close, set the tone for U.S. trading.

Investors’ confidence was knocked down further by data showing that the economy may be decelerating more than anticipated. A Commerce Department report that orders for durable goods in January dropped by the largest amount in three months exacerbated jitters about the direction of the U.S. economy, which were raised a day earlier when former Federal Reserve Chairman Alan Greenspan said the United States may be headed for a recession.

“It looks more and more like the economy is a slow growth economy,” said Michael Strauss, chief economist at Commonfund. “Moderate economic growth is good _ an abrupt stop in economic growth scares people.”

The market had been expecting the government on Wednesday to revise its estimate of fourth-quarter GDP growth down to an annual rate of about 2.3 percent from an initial forecast of 3.5 percent, and grew increasingly nervous on Tuesday that the figure could come in even lower.

The housing market, which the Street had been hoping had bottomed out, also looked far from recovery after a Standard & Poor’s index indicated that single-family home prices across the nation were flat in December. A later report from the National Association of Realtors said existing home sales climbed in January by the largest amount in two years, but the data didn’t erase housing-related concerns, as median home prices fell for a sixth straight month.

A suicide bomber attack on the main U.S. military base in Afghanistan where Vice President Dick Cheney was visiting also rattled the market.

China’s stock market plummeted Tuesday from record highs as investors took profits when concerns arose that the Chinese government may try to temper its ballooning economy by raising interest rates again or reducing more of the money available for lending.

“Corrections usually happen because of a catalyst, and this may be it,” said Ed Peters, chief investment officer at PanAgora Asset Management. “The move in China was a surprise, and when a major market has a shock it ripples through the rest of the market. With all the trade that goes on with China, there tends to be a knee-jerk reaction with that kind of drop.”

The market has been going strong for a while now, so a correction is probably due. If there is a good thing about this, it’s that when it’s all said and done, there will be many good deals out there. When the Asian market had a huge correction back in the late ninties, it affected the US market then as well, causing some people over here to panic. It was the amateur investor, however, who saved the day by buying up all the major deals, which helped bring the market back up.

Carl Levin Sees the Light on Syria
Faking it 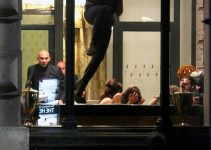