Al Gore’s mansion uses more than twice the electricity in one month than the average household does in an entire year. From the Tennessee Center for Policy Research:

Last night, Al Gore’s global-warming documentary, An Inconvenient Truth, collected an Oscar for best documentary feature, but the Tennessee Center for Policy Research has found that Gore deserves a gold statue for hypocrisy.

Gore’s mansion, located in the posh Belle Meade area of Nashville, consumes more electricity every month than the average American household uses in an entire year, according to the Nashville Electric Service (NES).

In his documentary, the former Vice President calls on Americans to conserve energy by reducing electricity consumption at home.

The average household in America consumes 10,656 kilowatt-hours (kWh) per year, according to the Department of Energy. In 2006, Gore devoured nearly 221,000 kWh–more than 20 times the national average.

Last August alone, Gore burned through 22,619 kWh–guzzling more than twice the electricity in one month than an average American family uses in an entire year. As a result of his energy consumption, Gore’s average monthly electric bill topped $1,359.

Gore’s extravagant energy use does not stop at his electric bill. Natural gas bills for Gore’s mansion and guest house averaged $1,080 per month last year.

“As the spokesman of choice for the global warming movement, Al Gore has to be willing to walk the walk, not just talk the talk, when it comes to home energy use,” said Tennessee Center for Policy Research President Drew Johnson.

In total, Gore paid nearly $30,000 in combined electricity and natural gas bills for his Nashville estate in 2006.

Yikes! Gore is an energy glutton. Now compare this to President Bush’s comparatively modest home in Crawford, Texas, which is a model of environmental friendliness:

The 4,000-square-foot house is a model of environmental rectitude

Geothermal heat pumps located in a central closet circulate water through pipes buried 300 feet deep in the ground where the temperature is a constant 67 degrees; the water heats the house in the winter and cools it in the summer. Systems such as the one in this “eco-friendly” dwelling use about 25% of the electricity that traditional heating and cooling systems utilize.

A 25,000-gallon underground cistern collects rainwater gathered from roof runs; wastewater from sinks, toilets and showers goes into underground purifying tanks and is also funneled into the cistern. The water from the cistern is used to irrigate the landscaping surrounding the four-bedroom home. Plants and flowers native to the high prairie area blend the structure into the surrounding ecosystem.

No, this is not the home of some eccentrically wealthy eco-freak trying to shame his fellow citizens into following the pristineness of his self-righteous example. And no, it is not the wilderness retreat of the Sierra Club or the Natural Resources Defense Council, a haven where tree-huggers plot political strategy.

This is President George W. Bush’s “Texas White House” outside the small town of Crawford.

Keep in mind that this piece by Rob Sullivan was first published in the Chicago Tribune in 2001, so the fact that President Bush’s home was ecology friendly was not unknown in the media. They just chose to ignore it while they heaped praise on Gore.

And take a look at this piece from TreeHugger:

Only your dispassionate Canadian correspondent could write this without colour or favour, but is it possible that George Bush is a secret Green? Evidently his Crawford Winter White House has 25,000 gallons of rainwater storage, gray water collection from sinks and showers for irrigation, passive solar, geothermal heating and cooling. “By marketplace standards, the house is startlingly small,” says David Heymann, the architect of the 4,000-square-foot home. “Clients of similar ilk are building 16-to-20,000-square-foot houses.” Furthermore for thermal mass the walls are clad in “discards of a local stone called Leuders limestone, which is quarried in the area. The 12-to-18-inch-thick stone has a mix of colors on the top and bottom, with a cream- colored center that most people want. “They cut the top and bottom of it off because nobody really wants it,” Heymann says. “So we bought all this throwaway stone. It’s fabulous. It’s got great color and it is relatively inexpensive.” Hmm, back to that vote about the Greenest President?

George Bush lives environmentalism whereas Al Gore only gives it lip service, yet he’s is hailed as God’s greatest gift to the environment. Meanwhile, he greedily consumes far more energy than the average American who, by the way, would be footing the bill for Kyoto if we hadn’t pull out of it.

Every single one of those actors at the Oscars last night who was applauding Al Gore and nodding his or her head in agreement when Gore said global warming is a moral issue not a political one, needs to take lessons on how to be eco-friendly from President Bush. Next time liberals smugly announce that they drive Priuses, laugh in their faces.

Hypocrisy, thy name is Gore.

By the way, read all of Sullivan’s piece on President Bush’s Crawford ranch. In spite of the president’s efforts to build a home that is as environmentally friendly as possible, he nonetheless, reaches to ridiculous lengths to find ways to slam the president as being inconsistent:

I suppose in George W.’s architectural world only the rich and powerful have views; vistas that the public owns as part of its shared heritage are up for lease and sale.

Heymann also termed the house “stunningly small.” Really? Would it be stunningly small for a single mother in South Central Los Angeles? How stunningly small would it be for an immigrant Latino family in San Antonio Maybe in the rarified heights where second homes are the norm, 4,000 square feet is small and on a stunning scale as well, but in Main Street America that much elbow room is pretty big for the first and only home.

But then most of us can’t reconcile what might at first glance appear to be inherently irreconcilable. Maybe some day, like our noble president, we will be able to make that kind of staggering mental feat. That is, if we ever stop misunderestimating ourselves.

Update: John Hinderaker at News Bloggers asks about Gore’s other homes and modes of transportation:

How much energy do his other mansions and estates consume? And how about those private airplanes, the ultimate CO2 machines? The fun that could be had at Gore’s expense is just about infinite.

The Anchoress writes about the pro-environment and pro-economy initiatives that President Bush advocated but were completely ignored by the environmentalists and the complicit media:

I think it’s an amusing double-standard. Gore gasses away about the environment while he and his friends use private jets to go from huge, air-conditioned home to home, and he is heaped with accolades and good press, while Bush says little about the environment but lives the green-creed at home and gets no press…unless it can be negative press.

So, while you hear nothing at all about President Bush successfully gaining international co-operation for a green initiative that does not destroy economies like the Kyoto treaty, and you read nothing about how the president is committed to helping the restoration of ancient Iraqi Marshlands, you hear rather too much about all the preening and moralizing going on by Green Al Gore…except when he cancels interviews that might make him address…inconvenient dissent.

1) Gore’s family has taken numerous steps to reduce the carbon footprint of their private residence, including signing up for 100 percent green power through Green Power Switch, installing solar panels, and using compact fluorescent bulbs and other energy saving technology.

2) Gore has had a consistent position of purchasing carbon offsets to offset the family’s carbon footprint — a concept the right-wing fails to understand. Gore’s office explains:

What Mr. Gore has asked is that every family calculate their carbon footprint and try to reduce it as much as possible. Once they have done so, he then advocates that they purchase offsets, as the Gore’s do, to bring their footprint down to zero.

How are the other households in Gore’s region going to reduce their carbon footprint to zero when he consumes huge amounts of green energy? There’s only a finite amount of alternative energy to go around. For example, the Tennessee Valley Authority installed fifteen new wind machines in the Buffalo Mountain site, bringing that site’s production to 29 megawatts of electricity, enough energy for 3,780 homes. However, I would bet that when the TVA did their statistical analysis, they weren’t using homes as large as Gore’s in their calculations. The average home in the US is 2,300 square feet, significantly smaller than Al Gore’s home, which means Gore’s mansion has got to skew that statistic quite a bit.

This is a zero-sum game, folks. The more of the 29 megawatts he uses the less there is for others to use, so he still looks really gluttonous. Additionally, based upon the law of supply and demand, he drives up the price of this green energy, preventing others from using it because it becomes too cost prohibitive.

Update III: My comments above are in response to those who retort that Gore signed up for the TVA Green Power Switch and, therefore, get all of his energy from alternative energy sources, not from traditional sources. However, Wizbang commenter SCSIwuzzy makes a great point (emphasis mine):

I work for a utility company, a rather large one at that. We have nukes (more than any other in the US), windfarms, geo, gas, hydro, coal and oil.

And I’ll side with Leo and Jess. Electrons are electrons. No matter who you pay your generation charges to, you are getting your juice from the nearest one or two stations, dirty or clean.

Paying TVA or Green Mountain or whomever only subsidizes the green gen stations. If you want to help reduce emissions, push for more nuclear plants, invest in research and most of all, use less energy and take load off the damned grid.

Brutally Honest is following this as well. 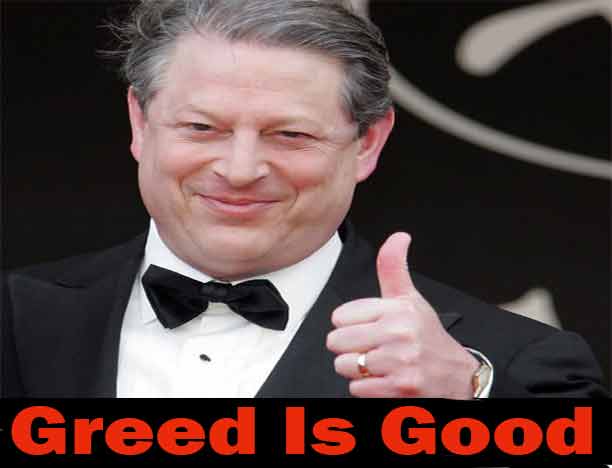