This week’s Weekend Caption Contest™ gives us a chance to say goodbye to an old Caption Contest friend. One day when the Chuck Norris fad has run its course the world will rediscover the Rumsfeld fighting techniques. Until then we’ll just have to make do with these farewell captions. The assignment this week was to caption the following picture: 1) (Bryan) – Bush: (thinking): “Christ, does this guy ever clean his ears? It’s like a fucking quagmire in there!“

4) (Teflon) – “Don’s leaving us to pursue other interests—such as spending the next two years getting a congressional colonoscopy courtesy of my new buddy Speaker Pelosi.“

6) (BlogDog) – “As the world began to crash around him, the President continued to read ‘My Pet Scapegoat’ to the assembled children.“

The Best Impersonation Of An AP Caption Writer Award goes to:

(Peter F) – “Don Rumsfeld contemplates what “until the end of my Presidency” really means.” 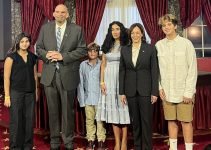