Someone needs to make Dafydd ab Hugh stop blogging and go back to writing novels. He’s really, really getting on my nerves.

For the most part, Dafydd is a pretty good blogger. But every now and then, he writes something that just makes me gnash my teeth and pound my head on my keyboard, because he’s taken something I’ve been bouncing around, trying to get my hands on, and just nails it — far better than I could have.

Well, the jerk’s done it again.

He’s managed to blend two notions I’ve been wrestling with into one seamless whole — an actual analysis of the tactics of the terrorists, showing how both their successes and failures have been tactical flops, along with a careful consideration of how a Democratic success at the polls will not spell the end of Western civilization, just raise the butcher’s bill a bit. They’re just as capable of fighting — and winning — the war on terror as the Republicans, but they aren’t ready to do so just yet.

It’s good analysis, the kind I’d like to do. But that miserable jerk beat me to it — and did it better than I would have.

Quick, someone throw him another book contract or something. 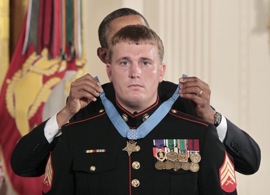