I had the pleasure of participating in a One Jerusalem blogger conference call today with Dick Morris.

These are the bloggers who participated: Banagor from Broadsword, Don from Liberally Conservative, Jerry Gordon from Israpundit, Pamela from Atlas Shrugs, Anne Lieberman from Boker Tov Boulder, Michael Illions and Hank Butehorn from Conservatives with Attitude, Omri from Mere Rhetoric, Jim Hoft from Gateway Pundit, Kim Priestap from Wizbang, and Chad from GDLL.

Mr. Morris began the conference call discussing Hillary Clinton’s senate reelection campaign. He said she can’t be defeated but says she must do as well if not better than she did against Rick Lazio whom she beat by 12 points. If she wins by only 5-6 points, she will have some explaining to do.

He then moved onto what he thinks will end up being the major scandal of the 2008 presidential campaign: the relationship between the Clintons and the emir of Dubai. Dick details the intimate relationship in his and Eileen McGann’s recently published article, to which the MSM gave no notice whatsoever. Considering how the MSM circles the wagons around Mr. Clinton — the Wallace interview is a prime example — it’s no surprise that Dick’s article was ignored.

After his opening comments Dick took questions from the bloggers. I was unable to catch all the questions, so I will post what I was able to pick up:

Pamela from Atlas Shrugs asked Dick what made him jump to “other side.” His response right out of the gate was that he didn’t jump to the other side. He always thought that Bill Clinton was in some ways a very good president. Dick supported Clinton’s welfare reform (Republicans passed it), balanced budget, and anti-crime initiatives.

There were, however, three points of departure. 1) He hated the way Hillary used secret police to go after Bill’s women. Rather than divorce him, she tried to destroy the women instead. 2) He didn’t want Hillary running for senate form New York. 3) He thought Clinton was a failure on terror. By the way, he told Clinton that his legacy would be weighed heavily by how he responded to terrorism. He failed.

Hillary and Bill are very different politicians. What made Bill a good president (domestic issues) – in Dick’s opinion – will make Hillary a terrible one. She’s a European socialist. She wants to reproduce what’s happening in Sweden, France, Denmark, etc. Although these economies are stagnant, if not down right destroyed, their citizens get free education, free medical care, etc. Hillary thinks this is what America needs.

Another blogger asked what Clinton was trying to do on Wallace’s show. Dick didn’t think Bill’s reaction was planned; he is never “out of control.” Rather, his outbursts are the ultimate form of control. The closer one gets to the truth, the more vociferous Clinton’s reaction. It was not good timing, however. September is supposed to be the month Clinton is on display because of all that he is involved in: UN etc. He stepped on his own story.

One question was about what Sandy Berger was doing in the national archives. Dick said it was pretty obvious that he was trying to get rid of the documents that implicated the Clinton administration before 9/11.

Dick also discussed Hillary’s chances of winning the presidency in 2008. He believes that Hillary will win the Democratic nomination. Al Gore is the only one who can stop her. Dick also made a very interesting point about Hillary’s ability to motivate a completely new voting group. He thinks single mothers will support Hillary in droves. These women who have never voted before will come out and vote for Hillary because they think she will help them. Dick also said that African-Americans adore Bill and Hillary and that hispanics voted overwhelming for Hillary over Rick Lazio.

I was the last to ask a question. I commented that recently James Carville said that Bill Clinton’s performance on Chris Wallace’s show energized the Dems, that it infused the them with badly needed backbone. I, however, didn’t buy any of it. I asked Dick how Bill’s outburst on Fox News Sunday could actually help the Dems when the interview did one thing: focus everyone’s attention on Bill Clinton rather than on issues that actually help the Dems. After all, when Bill Clinton takes center stage, it’s all Bill Clinton, all the time, and he sucks everything away from the Dems – it’s cannibalistic in a way. Dick agreed and said that Bill Clinton’s interview will hurt the Democrats for a variety of reasons. First, the interview brings attention back to terrorism, which is always bad for Democrats. Second, it also brings attention to Bill’s temperament. Finally, it sucks all the attention away from Hillary, so now the question is how is Bill going to help get the attention back to her?

The American Thinker is on the same wavelength as I am. Check out Noel Sheppard‘s piece called “Clinton Narcissism Killing the Democrats.” Here’s a portion:

A funny thing happened on the way to the midterm elections: everybody started talking about Bill Clinton. Television networks, newspapers, present and former DNC chairmen, Speaker of the House wannabes, left-wing shills, you name it. For almost a solid month, the former president filled the airwaves like a new strain of influenza in the dead of winter.

What haven’t the Democrats and their media minions been talking about since summer ended? Surprisingly, the only issue that can lead them to victory six weeks from now – Iraq.

Doesn’t seem like a very wise campaign strategy, does it?

Read the rest of Noel’s piece. 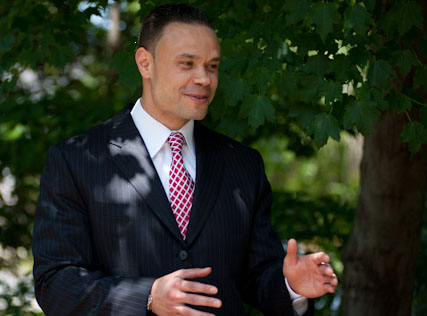