I still can’t believe this guy was president for eight years. It is amazing that a majority of the American people would elect this guy twice. (Oops, forgot — they didn’t.) If you haven’t seen the video of Bill Clinton’s meltdown yet, check it out now.

Update; One thing that you can say about Bill Clinton is that he is consistent. The first press conference he held after becoming President was striking to me in that he spent an incredible amount of time blaming the evil Republicans for everything. At the time I thought he sounded so unlike any other president in my lifetime and I just knew he would not be successful by blaming others rather than taking responsibility for his own actions (or inaction). I was wrong because he did enjoy success in the opinion polls by bashing his opponents. (A big dot com bubble that boosted the economic outlook didn’t hurt either.)

I was right too though, partially at least, because he never did really win over those on the other side of the aisle, at least not at the ballot box. Listen to any of Clinton’s speeches or interviews and you will hear at least some form of blame being placed on his opponents. Like I said, he is consistent.

The Blogatorium Is Open
The White Man's Burden, Part V: Who's Next, or Where Do We Go From Here? 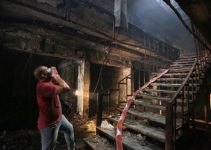