Home
Dumb Criminals
In for a penny, in for a pounding

There’s a line in a Bob Dylan song that goes “to live outside the law, you must be honest.” I’ve always thought that was good advice — if you’re a fugitive or breaking the law somehow, you need to be very circumspect in not coming to the law’s attention under any circumstances. Keep a low profile. Don’t speed. Don’t get into fights. Don’t apply for a gun permit.

And for god’s sake, don’t commit any penny-ante crimes.

That was advice David Graves of Lowell should have taken to heart.

Mr. Graves is a convicted sex offender. When he was 15, he was convicted of “indecent assault and battery on a child over 14.” His record was sealed, as he himself was a juvenile, but one of the terms of his release was that he register as a sex offender.

That’s why when he applied to be a janitor in a school, his criminal record came back clean.

And that’s how he had the opportunity to allegedly steal over $1,000.00 in pennies.

The students at his school, as a Holocaust Remembrance project, were trying to collect 1.5 million pennies, one penny for each person killed in the Holocaust. They were well on their way to their goal when a teacher noticed that the pennies were disappearing out of locked closets. A brief investigation led to Mr. Graves, and further investigation led to his failure to register.

So he’s out his $12.25/hour job (which is more than I make, for the record) and is looking at jail time while his wife is expecting their first child. Good choice, Dave.

(The Boston Herald’s account focuses on the sex-offender aspect, while the Globe, predictably, goes more towards the school-project details. The sex offender part doesn’t come up until the second page, overlooking that he was convicted of sexually assaulting a high school-age victim and is now working in a high school.) 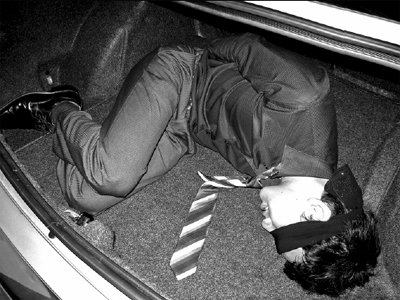