Cal Thomas had the chance to see a preview of Oliver Stone’s movie World Trade Center and loved it. In fact, he ranked it right up there with some of his favorite patriotic movies. Here’s a portion of his comments:

I have a long list of favorite patriotic movies, including “Victory at Sea,” “Yankee Doodle Dandy” and “Sands of Iwo Jima,” but Oliver Stone’s “World Trade Center” is right up there with the best of them. It is one of the greatest pro-American, pro-family, pro-faith, pro-male, flag-waving, God Bless America films you will ever see.

“World Trade Center” is the story of five men who volunteered to enter the twin towers on Sept. 11, 2001 in their role as officers of the Port Authority Police Department (PAPD). Three of them died and two, Will Jimeno (played persuasively by Michael Pena) and Sergeant John McLoughlin (played magnificently by Nicolas Cage), were buried in the rubble. These are real men who love their wives and children and are not afraid to say so. They are religious men who pray without shame or reserve. In fact, Jesus makes an appearance in Jimeno’s hallucination, carrying a bottle of water to quench his thirst). Treating faith as genuine and with respect has only recently made a comeback among filmmakers.

Movies like “World Trade Center” – and “United 93,” which preceded it – don’t come along very often. More should.

There are many scenes that will cause audiences to reach for the tissues, but the last one is a true resurrection moment. As Jimeno, first, and then McLoughlin are lifted out of what could have been their graves, they are passed from hand-to-hand along a gauntlet made up of their colleagues, more than 50 of whom are real-life members of the PAPD, the NYPD and FDNY who were flown to Los Angeles for the scene.

Whatever one thinks of Oliver Stone, the man knows how to make movies. This is one of his best. It deserves an Oscar in so many categories. It also deserves the thanks of a grateful nation. Go and see it beginning Aug. 9 and make him a large profit so he might consider inspiring us again, as his predecessors so often did during Hollywood’s Golden Age.

Michelle Malkin has a round of up of other conservatives who spoke highly of Oliver Stone’s World Trade Center. 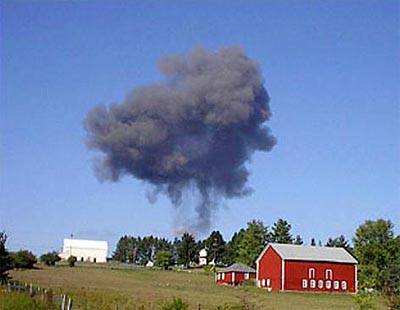