So Kevin decided to let me back in this week, even with my potty mouth.

No muscle cars tonight, though. No, tonight we turn our thoughts to the World Cup. Yep, it’s that time again. 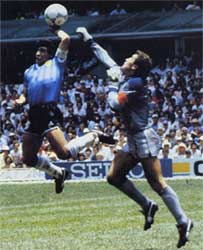 So what the hell do I know about soccer? Oh, I’m sorry. FOOTBALL. Honestly, I don’t know much except that every four years I pretend to have this great interest in FOOTBALL and I go all World Cup crazy. That is, until America gets its collective ass handed to it and I go back to watching baseball like a good American.

I do know enough about football to carry on a decent conversation. Or get one started. Whenever someone mentions the sport, I just say, in no particular order: Pele! Hooligans! Maradona! And depending on who you are talking to, that last one might get you a smack in the head, especially if you follow it up with the phrase “Hand of God!” Which I often do because, hey, if you’re gonna get yourself all excited about a sports tournament which your team really has no chance of winning, you might as well get some good, sporting fun out of it by pissing some people off.

See, I think the World Cup is nothing more than a good excuse for nation hating. It’s no longer politically correct to just bag on other countries for no good reason. So we use football as an excuse to say things like “Mexico couldn’t play their way out of a fucking pinata!” or “England sucks!” Ok, maybe we say that one anyhow. No offense, Brits. It’s just the way it is. Kinda like a Mods/Rockers thing, you know? Friendly rivalry. Yea, friendly.

I mean, look at all the countries we get to make up chants about. Trinidad and Tobego! Ghana! Iran! Oh, fuck yea. We’re gonna go Ayatollah on your ass, Iran! See? See how easy that is? Think of it as misplaced national pride. Where else are you gonna shout USA! USA! USA! these days without someone thinking Karl Rove gave you eight bucks and a candy bar to say that? See, World Cup is for everyone. It works out great for people who measure their patriotism by bumper stickers because they can drape themselves in a flag and just call it football frenzy. And it also works out for people who have been kinda down on the state of the union since, oh, November 2004, because they can wave a flag and shout America, fuck yea! without feeling like they are betraying their ideals. It’s all about the soccer ball. Uh, sorry. The football.

So I’m looking forward to World Cup 2006. I think I still have a Pele shirt from that Giants Stadium gig in 1977. I’m brushing up on my ‘let’s mock the cockney accent’ phrases. I’ve been practicing saying the word ‘hooligan’ several times a day (hey, it’s a fun word). I have sharpened my “hand of god” conversation starter so that I can ignite a heated argument in under five seconds. I’ve got a bunch of UK punk songs about football loaded up and ready to go.

See, it doesn’t take much to feel part of the action. Say it with me. Pele! Hooligans! Maradona! ENGLAND SUCKS!

Faster than the world: a blog about punk rock , fast cars and sometimes, world cup