Fortunately for the two players charged by District Attorney Mike Nifong, Reade Seligmann and Collin Finnerty, the match is not to any player, but to the accusers boyfriend.

May 13, 2006 — The second round of DNA test results in the Duke University rape investigation show “no conclusive match” to any lacrosse players, defense attorneys said, but a vaginal swab of the alleged rape victim produced DNA from a “single male source” — a man not on the lacrosse team who did not attend a March 13 party that was the site of the alleged rape.

Defense attorney Joe Cheshire declined to identify the mystery man or his connection to the alleged victim, but ABC News’ Law and Justice Unit has learned that the unnamed source of the DNA is the alleged victim’s “boyfriend,” according to her mother.

ABC News is withholding the name of the man because he is apparently not a target of the investigation. Records indicate that Durham, N.C., police gave the “boyfriend” a cheek swab to collect DNA on May 3, ABC News’ Law and Justice Unit has learned exclusively.

There was also some level of matching on material (fake fingernails) that one (or more) of the players gave to police. Defense attorney Joseph Chesire, who represents a player not charged, said, “Is that consistent with someone that knowledgeably and knowingly committed a rape?” he said. “That they would leave fingernails that were ripped off a person in a violent struggle in their trash can after they’re told there’s an investigation and that police were going to come to their house, and when the police do, they give them the fingernails?”

Update: John in Carolina notes that newspaper readers in the area aren’t getting much on the “boyfriend” angle of the story from The Raleigh News & Observer; the question is why not?

It's deja vu all over again
Imperial Dipstick, Part Deux 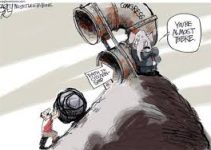