Lately, I’ve been reconsidering what many consider one of the high points of the 20th century: the Nuremberg trials.

It was a stunning achievement. For the first time, the leaders of a nation were held accountable in a court of law for their actions. The notion of sovereign immunity was set aside in favor of human rights, and high-ranking Nazis found themselves having to answer to an authority they never envisioned. In the end, justice prevailed; many found themselves facing death, life imprisonment, or decades of incarceration for their crimes against humanity.

Unfortunately, the legacy of Nuremberg has been perverted into something hideous. The Nuremberg trials were not civil courts, but military tribunals. The war’s victors chose the judges, and the defendants had no appeals. In fact, in many ways the Nuremberg trials violated many basic tenets of civil and criminal justice. Regardless, 12 Nazis were given death sentences, three sentenced to life, and four more sentenced to 10 to 20 years in prison.

Since then, many have worked behind the scenes to reshape the legacy of Nuremberg. The notion of military tribunals has been lost, and now the model of criminal courts, with regular judges, regular rules of evidence, and all the trappings has come into vogue. And it’s being found woefully lacking.

Witness the trial of Slobodan Milosevic. That trial stretched on for over four years, with tons of legal wrangling and theatrics. Milosevic turned the trial into a circus, keeping himself entertained and continuing to antagonize and taunt the world for years until he got the final laugh on us all — by dying before the trial could conclude. He cheated the hangman, as they old saying goes, and turned the whole circus into a colossal waste of time, money, and effort.

Witness the trial of Saddam Hussein. He appears to be trying the same tactic, tossing up as much confusion, chaos, and anarchy as he can. And I can’t blame him — if I were in his position, I’d most likely be trying everything I could to postpone the inevitable execution, and to cause as much mischief and headaches to my persecutors.

Witness the potential trial of Charles Taylor. The former Liberian dictator is clearly guilty of numerous crimes against humanity, but there are arguments of whether he will even be arrested, let alone tried. And if he is put on the dock, I feel pretty comfortable predicting his trial will be as absurd as Milosevic’s and Hussein’s.

I know this will make me sound barbaric, but I think we need to seriously consider whether we want to put former dictators and tyrants on trial.

I don’t quite have a solution worked out, but I think that in cases like Hussein, where he was deposed by an outside power, that power (in this case, the United States) should decide beforehand his fate. For some, exile should suffice. They should be transported to a third nation and informed that if they set foot in their former homeland, or the United States, or in certain other countries, they will be summarily executed. Likewise if they try to influence events in their homeland. The US intervention in Haiti would be a good example of this, I think.

In cases as heinous as Hussein’s, exile simply won’t be an option. They will be summarily executed as soon as they are found. Their crimes against humanity are so flagrant, there can be no legal defense. For their past crimes, as a warning to others who might choose to emulate them, and to prevent their becoming a rallying point for their supporters, just kill them, make their deaths widely known, then dispose of the body in a way that there is no grave to become a shrine.

Yeah, it’s a touch barbaric. But sometimes being too civilized can be suicidal.

If nothing else, it’ll make asshats like Ramsey Clark have to look for honest work, and that’s a good thing. 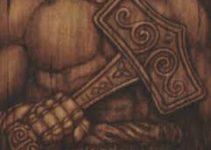