Home
Media
"We're the New York Times. Don't tell us about reality; we live in our own world."

Last week, the New York Times had a breathless scoop: President Bush and Prime Minister Blair were so eager to go to war with Iraq, Bush was actually ready to provoke the fight, on a par with the Gulf of Tonkin incident and Hitler’s engineered conflict with Poland (in which German soldiers in Polish uniforms staged an “attack” on Germany). Bush, they say, suggested that US spy planes be painted with UN colors and markings so Saddam would be tricked into “attacking” UN aircraft.

Now, before I go any further, let me lay my credentials on the table: I have none. As I have frequently said, I am a nobody from nowhere with a nothing job and no life. I have no inside sources, no secret documents, no “dirt” that would contradict any element of the TImes’ story. All I have are facts, suppositions, and logic — and with those tools, their story simply doesn’t hold up.

During World War II, the Allies did a great deal of experimenting with reducing the visibility of aircraft. At the time, radar was still in its infancy; the most reliable aircraft-detection device was still the Mk I human eyeball. At night, it was pretty easy; just avoid the spotlights. But during the day, aircraft tended to stand out as stark silhouettes against the sky.

One experiment that had surprising success involved actually putting lights on the underside of the plane. It seems counterintuitive that one can hide something by shining lights from it, but at high altitudes the lights helped wash out the plane’s silhouette and blended it into the sky.

The lesson out of this is that aircraft are most often recognized by their silhouette. Their shape is their most distinctive trait. That’s because other details, like coloring and markings, are only visible when the aircraft is fairly close to the observer.

Try it yourself. Go look at aircraft some time. See just how low they have to be before you can make out which airline the plane belongs to, and how quickly they become just dark shapes against the sky.

And those are just airliners — they normally fly at 30,000 to 35,000 feet. The “observation planes” being referred to are U-2 jets, and those normally cruise at least twice that altitude. They’re rarely even visible from the ground. We could paint them pink with great big purple polka-dots and no one would notice. Hell, we could plaster them with renditions of the infamous Danish Mohammed cartoons and fly the plane over the entire Muslim world and not a single whacko would riot.

So, there shoots down (so to speak) the basic notion of re-painting surveillance aircraft. But I know what a lot of you are saying — Bush is a notorious dim-bulb, who’s to say he didn’t suggest it anyway?

Well, how about remembering that Bush was an Air National Guard fighter pilot. A key part of pilot training is aircraft recognition — and pilots are taught to look at silhouettes. And he most likely spent a great deal of time looking up at aircraft, and he is bound to remember how difficult it is to see coloration and markings.

Yeah, perhaps the Times actually got it right. It is possible that the memo actually exists, and is accurate. But there are enough factual flaws and questionable suppositions that they cite that send my BS detector into overdrive. Toss in the Times’ historical trend of getting stories wrong (or just making stuff up) that slams Bush, and this memo story just reeks. 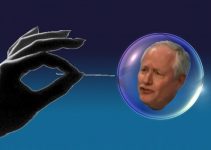