Home
Categories
Stand up for yourself?

Earlier today, I discussed the case of Imette St. Guillen, the Boston woman brutally murdered in New York City last week. It got me thinking about some bigger issues, and one of them is the right to self-defense.

This comes up most frequently in discussions of gun control and the Second Amendment, but it’s much bigger than that. Some states (most notably Massachusetts) have curtailed the right of self-defense to the point of imposing a “duty to flee,” where citizens are NOT entitled to confront intruders and defend their homes, but must instead escape if it is at all possible.

It also is a major factor in international relations, as many wars are usually justified as examples of “self-defense.” Hitler used this in his invasion of Poland, when he staged an “attack” against himself and then “counter-attacked.” That ploy was so transparent that it triggered World War II.

But I digress. (So what else is new?) I’ve been wondering if there really is any “right” to self-defense, and I have come to the reluctant conclusion that I do not believe so. We have no right to self-defense.

To me, a “right” is an action that one can choose to exercise or not, depending on the individual. We all have the right to speak freely, but we can also shut up. We can assemble, or we can stay home. We can worship how we wish, or not at all.

In that vein, in our society and in the world today, I don’t think we have a “right” to self-defense.

It should be a duty.

Everyone should be obligated to defend themselves against the predators, the aggressors, the savages among us. For to allow them to act freely is to empower them, to encourage their ways. We have a duty to each other and our society as a whole to not permit them that freedom.

An excellent example is some small towns (usually in the South) that pass an ordinance that requires all households to possess at least one firearm. This is usually accompanied by a mechanism for those who refuse to do so — often a nominal fine, which is normally waived — but changes the presumptions of criminals: instead of counting on homeowners to be unarmed, the default is now that they do possess a gun. The crime rates in such areas tend to plummet.

I do not advocate that my beliefs be reinforced by law, but I would hope that they would be taken into custom and social practice. As Robert Heinlein famously observed, “an armed society is a polite society” — and predators tend not to go after dangerous prey. 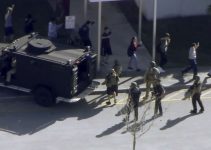