This weeks Weekend Caption Contest™ was another smash hit, generating over 150 entries. In the vast history of the Weekend Caption Contest I can’t remember a winner from the very first entry, but even a non-LOTR fan like me can see the humor in a Gollum reference… The assignment this week was to caption the following picture: 2) (McGehee) – “A census taker once tried to test me. I ate his liver with some fava beans and a nice chianti.“

4) (OregonMuse) – “I’m sorry, but it’s been frozen like this ever since I took a wrong turn and accidentally walked in on Dick Cheney in the Senate men’s room.“

5) (Hamish) – “Senator, if that’s your ‘O-Face,’ I think I understand why Bill spent so much time catting around.“

6) (Lindy R. Dole) – “DNC Factoid: Only Hillary can hit the high notes during the queefing of the Star Spangled Banner.“

The Would That It Were True Award goes to:

And Now A Personal Note to Mick Jagger
Bonfire Of The Vanities #136 - Reminder
Tags:caption, contest, weekend 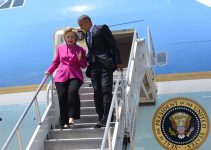