The fact they made an ass out of themselves and Alito is going to confirmed has them completely unhinged.

The Kos kiddies are trying to say it was all staged. Various liberals are saying that confirmation hearings are supposed to be about baseless mudslinging. But the most bizarre comment must be from the mentally deranged David Anderson who sees this as some some sort of battle between him and I personally….

And please, like the Democrats are suppossed to just lay down and give Bush Appointments a Pass. This shit is getting pyschotic. [sic] And I know I an inviting an attack by Wizbang’s resident Bad Boy (Yawn), who gives a shit. Bring it on Bad Boy. I know you will just take a couple of smug swipes over in your playground.

An odd thing indeed since I never mentioned him- but this is the guy who said that killing a few thousand poor people was OK if it lowered Bush’s poll numbers so I guess irrational behavior is to be expected.

David did get one thing right though… This IS getting “pyschotic.”

And no David… No linky for you. I know that is all you want.

Save The Planet- Clear Cut The Rainforest
The milk of human kindness
Tags:alito, attention, left, looney, samuel, the, whores 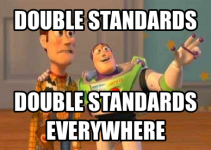