I’m in New York for the launch of the Pajamas Media project, which has been renamed Open Source Media. The launch event is here.

The proceedings got off to an inauspicious debut when author/journalist Elizabeth Hayt slammed blogs as narcissistic meanderings of bored rich people, boring, and useless. Since Katie Couric has the hots for Hayt, I figure it’s worth discussing her views with her further. I may not change her mind, but does it really matter?

Jeff Jarvis is listening to the webcast and he’s even more confused that he was before about what OSM is supposed to be. Mike Krempasky of Redstate is attending with me and he’s has a theory what it’s all about.

I’m here and I still don’t completely get it, but keep listening…

Update 2: As live blogging goes, this post didn’t provide much insight – sorry about that… I didn’t want to leave the days activities undiscussed, but frankly I’m too tired to recap all of the days events and discuss what I learned about OSM until I get some much needed sleep. Charles and Roger are friends for whom I wish nothing but the best of luck in their new venture. As with any new project their are questions to be answered along the way, but based on what I saw today they appear to have a superior group of talented people working to build their (new) Open Source Media empire 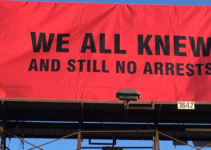