Update: The U.S. Supreme Court will hear an appeal from Anna Nicole Smith this term, which is important only because I found this ridiculous picture to post.

After that, we’re hearing in the office that Bush’s next nomination should come no sooner than Friday at 11 a.m., but my co-blogger Tim thinks it will likely be the beginning of next week before we hear anything.

Now, for the speculation. Here are some of the names on the table:

Confirm Them is wondering if Roberts cleared the path for an Estrada nomination, citing Estrada’s benign work experience and personal charm.

I only saw Estrada speak once, at a Heritage Foundation panel after the Supreme Court term of 2004, but he didn’t have the same sort of charm as Roberts does. It’s not that Estrada’s not charming. I think he’s hilarious, but he’s definitely more of a Scalia wit. As I remember, during the question-and-answer session, he wasn’t shy about letting on when he thought certain decisions were idiotic. Come to think of it, I wonder what part that transcript could play in a nomination process. Carol at Confirm Them has the same impression of Estrada as I do.

Many think Priscilla Owen is the gal (Novak says she met with the Prez), but Erick is hearing that Alberto Gonzales is being pushed by Rove. That just doesn’t make a lick of sense to me unless Rove has some ingenious plan in which destroying the majority he worked to create ends up being better for everyone in some way he can see but we can’t. Hey, come to think of it, maybe he’s trying to reduce spending by getting rid of some Republicans in ’06…. (Rove’s plan all along has been to turn this administration/Congress into a fiscally conservative one. Brilliant!)

The Post helpfully provides the administration with the names of women and minority candidates “worthy of consideration.” The Post’s lack of good faith is reflected in the inclusion of Judge Jose Cabranes, initially placed on the federal bench by Jimmy Carter and elevated to the court of appeals by Bill Clinton. Clearly, the Post is seizing on the clamor for a minority and/or female Justice in order to promote its agenda of keeping the Court from moving in a conservative direction.

To the losers go the spoils?
Maybe I oughta reconsider moving to Massachusetts after all...
Tags:court, john, roberts, supreme 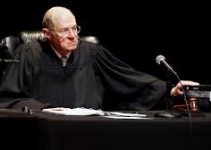